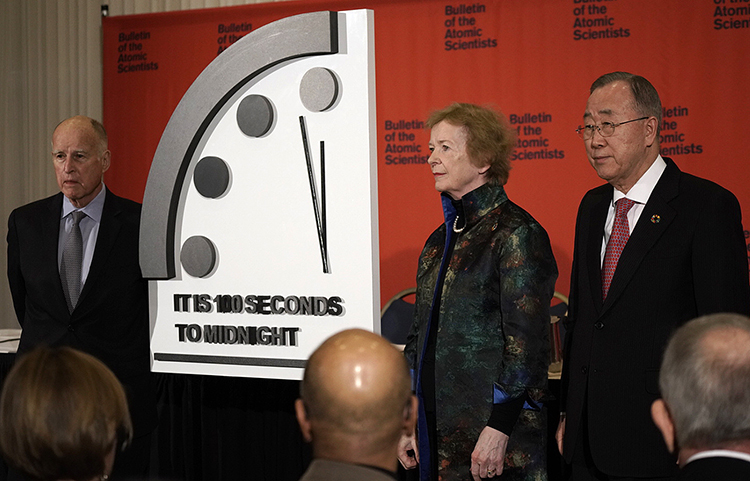 DREAD and panic have been put on hold at the Bulletin Of Atomic Scientists, after there was confusion over whether or not the Doomsday Clock was adhering properly to the ‘Spring Forward, Fall Back’ rule of daylight savings time.

Long regarded as a warning to the world since its inception in 1947, the Doomsday Clock has symbolically counted the minutes to 12 midnight – representing total human annihilation – with scientists recently moving the hands to 1.40s to midnight; the closest it’s ever been to the end.

However, mass panic was averted after it was revealed that the Doomsday clock on the oven in the kitchen did not match the Doomsday clock in the car, meaning that somebody neglected to ‘do the needful’ when the clocks changed in the Autumn.

“And could I be the first to say; we’re all tomato-red over this cock-up. Couldn’t be more embarrassed. We know the world’s leaders have always heeded the Doomsday Clock and done whatever they can to keep those hands from ticking forward, such as completely disarm their nuclear stockpile, or get serious about climate change. So to be in a position where they cannot give us any credence and continue on the march to global ruin, well, that’s our bad”.

[UPDATE]: The BAS have returned the Doomsday clock to its 1947 setting of 7 minutes to midnight after holding down the nib of a pen in a little hole on the back of it.