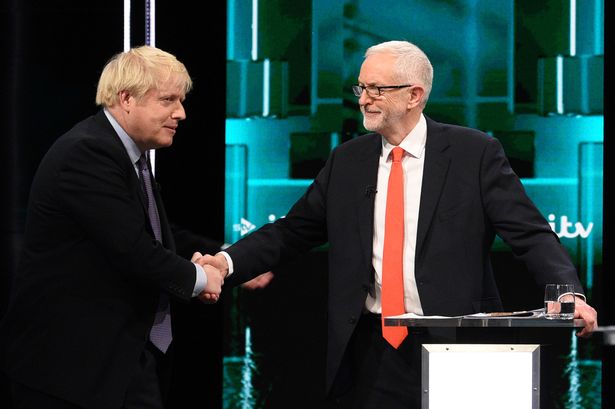 AS BLUSTERING continues over the identity of the party leader that ‘came out on top’ in ITV’s leaders’ debate between Boris Johnson and Jeremy Corbyn, the British voting public was announced as the resounding loser.

Pinpointing the exact moment the British electorate became the clear loser would require reviewing footage from any point over the last 100 years, however, the reality was hammered home around the time Boris Johnson first opened his mouth last night.

Excitable staff from polling companies milling around the ITV studios in the aftermath of the debate were tasked with gauging the public’s thoughts on who they intended on voting for after last night’s debate.

However, they found 100% of people polled had ‘entirely lost the will to live’, and instead of a Brexit deadline extension appealed for their own ‘election extension’ until electable leaders potentially materialised sometime in the 34th century.

“Well, at least a significant portion of the studio audience didn’t aggressively boo a politician when he said ‘poor people suffer the most’,” a relieved member of the electorate stated before being immediately shown depressing footage from the debate which set him straight.

With Johnson brazenly lying with such impressive frequency that lie detector tests started self-combusting, and Corbyn failing yet again to articulate his party’s Brexit stance, voters were spoiled for choice over what to grow despondent over while reaching for another well earned drink.

Meanwhile, the British electorate is to spend the rest of the day looking in the mirror and giving out to the people who will likely hand Boris Johnson a majority in the December 12th elections.