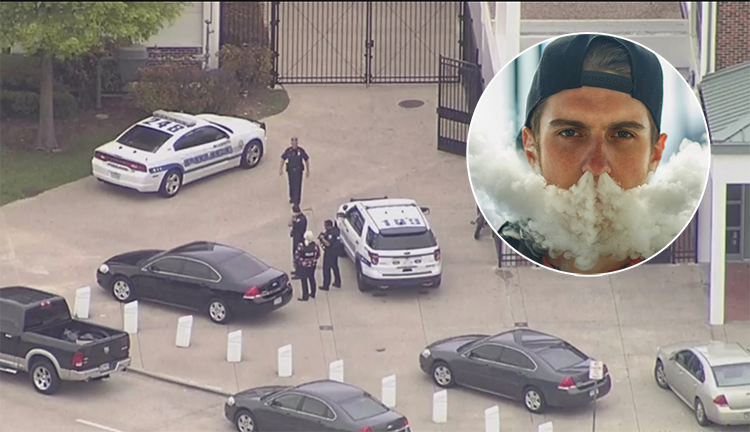 A TEXAS high school is said to be on lockdown this morning after a disgruntled student entered the building and reportedly began bellowing several plumes of flavoured vapor in the general direction of fellow students, WWN can confirm.

CCTV footage showed children ducking for cover under tables as a Caucasian male, believed to be in his mid teens, began inhaling and then exhaling the highly dangerous substance while calmly strolling though the school corridors, despite a proposed ban on e-cigarettes by US president Donald Trump.

Ever defiant, e-cigarette lobbyists have called on schools to provide teachers with their own Vape pens in a bid to defend classrooms, rubbishing the recent fears raised around the flavoured boiled chemicals.

It is understood over 500 children and teachers are still pinned down at the school, with no end in sight to the active vaper’s rampage.

“He just walked right past me blowing vapor right into the communal air,” one eyewitness witnessed with their eyes, “I’ll never forget the smell; it was like strawberries mixed with vanilla, and that noise, that God awful gurgling noise, I just wanted someone to shoot me dead and to end the whole ordeal”.

Empty Vape cartridges indicate the suspect may be carrying up to 6 different flavours of Vape liquid and may be using a stock attachment which delivers up to ten times the vapour into the lungs.

“Our thoughts and prayers are with the victim’s families,” President Donald Trump told press outside the White House today.