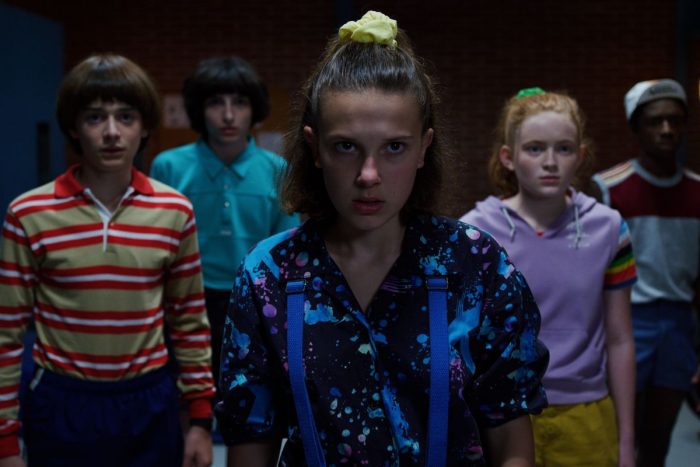 NETFLIX’S 80s-set hit show is back with a bang in its third season and WWN is here with a recap the first episode. Everything fans love about Stranger Things is still in place; including Eleven’s nose bleeds, a manic Winona Ryder, David Harbour’s sexy sheriff Dad Bod, the good-natured hijinks from the gang of teenagers and Steven Spielberg and Stephen King launching lawsuits citing copyright infringement.

The episode opens with the town of Hawkins enjoying a quintessential nostalgia-soaked American summer, and creators the Duffer Brothers waste no time in diving into the action:

“We fuckin’ killed her man. What are we going to do?”
“Aw shit dude, she’s definitely dead, who’s idea was this? We’re fucked, we’re so fucked”
“I’m not going to jail for this shit”
“Shut up, shut up everybody! Mike, get the shovel. After we bury her, we’re never speaking of this again, agreed?”

A visceral opening shows Dustin, Mike, Will and Lucas discover the joys of teenage drinking and after taking things a little too far they mow down a woman on a country road after deciding to steal a car. It all Demogor-goes wrong from here!

The writers, in this third season, are sticking even more closely to the 80s nostalgia vibes of the show’s setting and more accurately reflecting society of the time as the boys see no reason why they should have to suffer the consequences of their actions because at the end of the day they’re men.

Fans may find this development a shock to the system but the gang aren’t pre-pubescent teens anymore, they’ve finally begun to absorb all the lessons society has been teaching them from birth.

Relieved to discover the woman is merely a sex worker from a poorer area of Hawkins, they breathe a sigh of relief after discovering not enough value would be placed on the life of someone like that to properly investigate her murder and administer justice. Some viewers have argued that this could be a story just as easily be set in 2019 but it all seems very 80s to us.

In keeping with the 80s setting Sheriff Hopper pins the blame on Lucas as he is a black youth and sets about planting evidence to corroborate his deep seethed prejudices, and despite protests from Eleven and Max they aren’t listened to because c’mon, keep up, they’re girls.

What a way to kick things off, and we haven’t even mentioned the fact that the writers are planning on putting Will through the absolute horrors again for a nice change.

Episode highlights: Female viewers have urged men not to even think for a second about being inspired by Billy to bring the pornstache back into fashion.

Just 700 hundred stunt rats were killed during the filming of the exploding rats scene.

Gotta hand it to the sound people, the sound of the boys hacking through the limbs of the deceased women so her body would be easier to dispose of sounded very realistic.

That one friend who reliably popped up on your social media feed to declare “I don’t watch that shite” just as they did for Breaking Bad, Game of Thrones and 40 other shows. They don’t even get paid to do it, they do it for free. What a service.