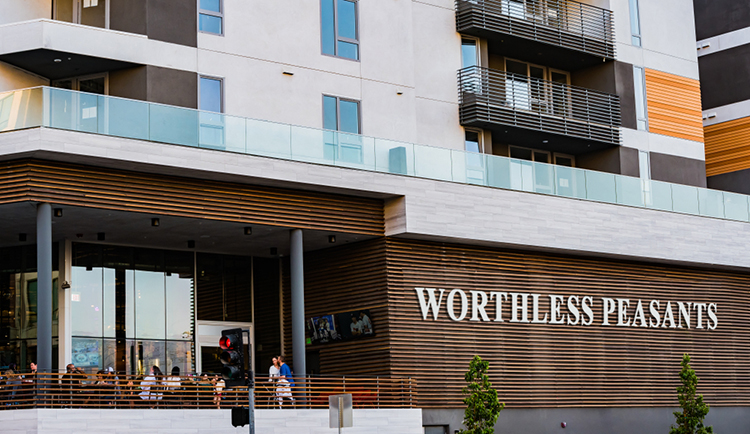 TAKING a leaf out of the book of a luxurious Dublin ‘co-living’ development in Dun Laoghaire named ‘The Orphanage’ so-called because it sits on the site of a former orphanage, another new development has decided to wear its disdain for and disconnect from the people who live in the buildings they build by calling their apartment complex ‘Worthless Peasants’.

The luxurious ‘barely-living’ complex stands out as a masterful living structure as it has a giant red flashing neon arrow pointing to the words ‘Worthless Peasants Live In Here’ and its opening will be attended all delighted government ministers.

“We cannot stress enough how much this shouldn’t be interpreted as the perfect nightmarish metaphor for the disregard we have for this younger generation and tenant class,” said the developer responsible for site in a joint statement with the Minister for Housing.

Rent prices for the amazing property which has one toilet per block of 90 flats starts at ‘just handover all your wages and consider yourself fucking lucky’.

Several blocks within the development are individually and tastefully named as ‘The Poor House’, ‘It’s A Lifestyle Choice’, ‘It’s Your Own Fault For Not Buying A House’, ‘This Is Your Parent’s Generation’s Pension Investment’ and ‘Why Weren’t You Just Born With Well Off Parents Like I Was You Fucking Idiot?’

Instead of keys, each resident can gain entry to the building via a full body and iris scan and by repeating ‘thank you master for allowing me to live here’ into an intercom.

People interested in the property have already been queuing to view the great value for money units and have been spat on by estate agents, who think ‘spacious’ is another word for ‘claustrophobic’, as part of the selection process.