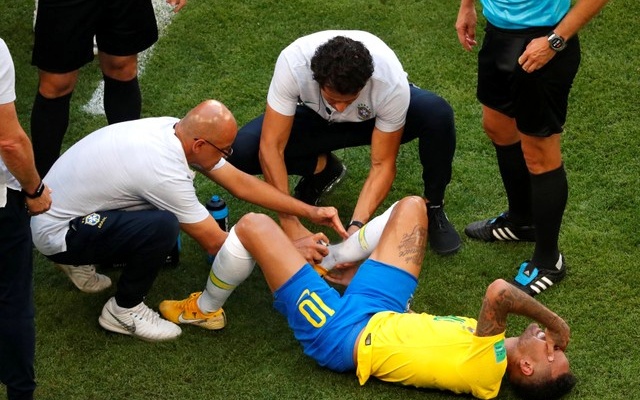 Football fans were repaid for their patience after enduring Spain and Russia with two far more entertaining games yesterday.

The football world is in mourning following the untimely death of Neymar after he was murdered by a stray Mexican player’s stud. A funeral will be held once the Brazilian’s body finishes rolling on the sideline.

The Mexicans tried to unnerve the Brazilians from the start with several player dyeing their hair Aryan blonde in a bid to prompt flashbacks to Brazil’s 7-1 semi-final loss to Germany in 2014.

Neymar appears to be the hooded Kermit the frog meme come to life in footballing form as Neymar’s internal dialogue seems to operate close to – Neymar: “Show the world what a great player you are” Other Neymar: “Was that a light breeze that passed by my leg? Better pretend I’ve been shot by a sniper while being electrocuted”.

On RTÉ Jim Beglin unleashed a line of commentary he was clearly working on for several weeks when he eagerly said “I’d prefer to see Neymar make history rather than histrionics”, and while viewers appreciated the liquid tongue of the Begster many preferred Brian Kerr’s take on the matter: “He’s having a giraffe, someone should lamp that dozy prick in the face. A good bursting is what he needs”.

Neymar showcased his brilliance as his genius back heel to Willian led to a tap in for the PSG forward, but it was too late for most fans who have labeled him a ‘colossal prick’.

Japan is now officially everyone’s favourite team following a spirited performance full of invention, skill, quick passing and intensity – all the things Belgium could be capable of if Roberto Martinez was not their manager.

Japan’s high pressing saw them produce a commanding performance which came undone in the closing minutes. Delighted viewers, who just before kick off had explained in detail why Japan would lose 18-0, were frantically looking up Wikipedia in a bid to explain ‘actually, I remember that now, Japan changed their manager not long ago and he introduced new tactics, I had a feeling they’d give Belgium a game’.

Haraguchi gave Japan the lead after a pacy counter attack with Inui adding a second minutes later after Kagawa created some space with his dancing feet. The Japan bandwagon was reportedly on the verge of collapse such was the volume of people claiming they were always Japan fans when Martinez introduced Fellaini switching to tactics which made Jack Charlton look like Pep Guardiola.

Fellaini was brought onto the pitch via a large crane, cementing himself in the box with orders to let all balls played into the box bounce off his head. Headed goals from Vertonghen and then Fellaini turned the tie around before poor Japanese decision making led to a breakaway goal for Nacer Chadhli after some sublime Lukaku play.

It was devastation for the thousands of people when Japan were knocked out as many were only three quarters of the way through finishing their Japanese flag facepaint and were on level one Japanese on Duolingo.

Over on BBC and ITV some viewers who were tuning in to watch yesterday’s knockout game were disappointed as the English broadcasters decided to have their panels discuss instead how they will be celebrating England definitely winning the World Cup.

Today’s games will either see the English media becoming so unbearable you might need to shut yourself off from the world until this is all over or have you chuckling with delight as you frantically search for the best ‘football’s not coming home’ memes.