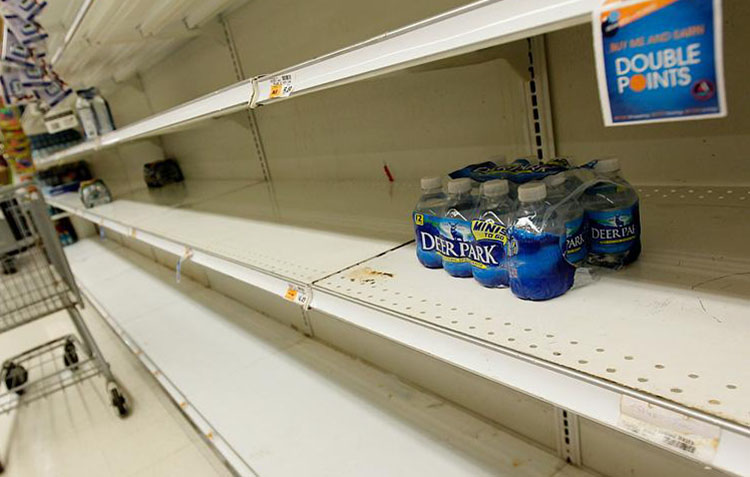 THOUSAND’S of off-licence selves were left empty this evening as Hurricane Ophelia makes its way towards Irish shores while its citizens scramble for beer.

“Many people have been left without cans and have resorted to begging outside shops,” said local emergency crew member Gerry Harte, “off-licence proprietors are urging customers not to bother travelling to the premises as they are all out of alcohol, with only useless bottles of water and sugary drinks left on the shelves”.

It is not yet known if off-licences will be restocking shelves before the storm hits tomorrow, but it does look likely many people will now be left stranded during the storm.

“I thought I’d grab a few crates after mass this morning, but when I got to the local Carry Out the place was empty and there were people crying and asking other people for cans,” said one misfortunate man earlier, “there’s no emergency off-licences set up anywhere which is typical of this government – we’re never prepared for this kind of thing”.

Pubs in over 10 counties have also confirmed that they are sold out of beer, wine and spirits, such is the overflow of panicked Irish people desperately trying to prepare for the worst storm in 50 years.

“We managed to get a crate off of a neighbour and it should do the four of us until the storm passes on Tuesday,” said local father of two, David Mackey, “I feel sorry for all those poor people out there who are left stranded with no alcohol. My thoughts and prayers go out to them”.

Emergency Guinness trucks are expected to make their way to the most stricken parts of the country on Tuesday with makeshift drink tents to be erected at key locations.

More as we get it.