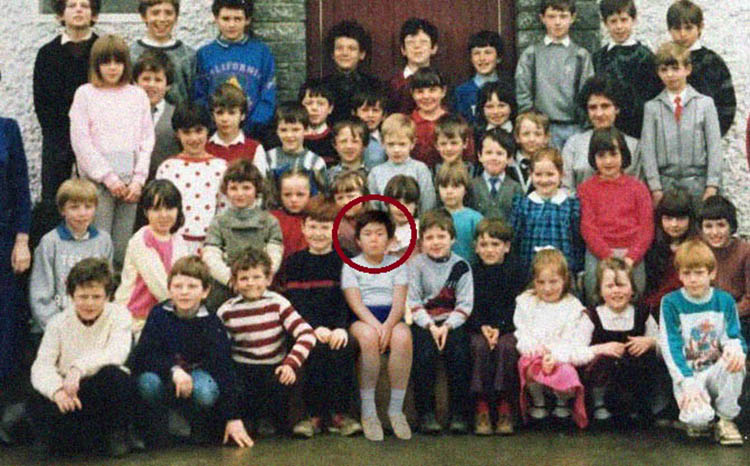 THE picture looks like any other picture from an Irish college; smiling youthful faces, giddy with being away from home for three weeks with nothing but the Irish language and new friends to make. It evokes vivid memories we all treasure, but look closer and you will see a face now known around the world.

To be kind, we’d call his face cherub-like, but the owner of the pudgy flesh already engulfing his features is in fact North Korean leader Kim Jong Un. Like many of Asia’s dictators past and present, Kim was educated in the West only to later rage against everything the developed world and its capitalist ways stood for. Less common in his formative years as a dictator-in-waiting was a scarcely believable stint on Achill Island at Colaiste Acla.

“I know you’re putting me under pressure to say ‘oh, you could tell he was evil, even back then’, but that’s nonsense, he was like any other kid that age, not a care in the world, the beginnings of some acne. He was awkwardly flirting with the girls, enjoyed the music we all liked and talked endlessly about the total destruction of the US. Just normal, teenager stuff,” explained Irish college classmate Aoife Moran.

Teachers remember him as the soft spoken token ‘foreign kid’ whose heavy Korean accent made it hard for him to be understood As Gaeilge, but after coming back year after year, he soon blossomed.

“Bless him, he tried. He really put the work in and he came on so much when he was here. At the beginning he was all ‘Tá’ and ‘Níl’, but he was only about 12, and then by the end of it, after a few summers, he had some stirring speeches about American pigs and how he would slit my throat if I tried to usurp him. A lovely, lovely student to have,” explained former Colaiste Acla teacher Niamh Ní Mhuirí.

The summer of 1999 in particular represents fond memories for all those who attended Acla, and many, as strange as it would seem, have fond memories of Kim as they reflect on being awkward and embarrassing teenagers.

“He went by Coimhín Ó Un back then – he was my first shift,” recalls Síobhan Halley, blushing, “all tongue, no technique, but sure I wasn’t much better”.

“He told me I should return with him to North Korea, but I was going into transition year, which was a bit of a piss take and I was looking forward to doing fuck all so I politely declined. I think he was just into me ‘cus my dad’s a farmer, he was always asking how to yield crops and avoid a famine. Actually, when I think about it now, he was using me for info,” added Halley.

Some Acla students even stayed in touch for a few years after that summer.

“Yeah, we were pen pals for years, I’d send him Caramac bars ‘cus he missed them so much, which probably explains the weight gain, my bad. And he’d send a list of chemicals he needed to make something he said ‘would be needed to readdress the world order’ and ‘help Korea reign supreme once again’. It was just your average correspondence that kind of fizzled out once I started 6th year,” said Eoin O’Neill.

Oddly, many of his former Irish college friends are in no hurry to criticise what he has become since those carefree days in 1999.

“Look, each to their own, and you never know what’s going on in someone’s life. I’m not going to judge him, he never did anything wrong to me, you know?” O’Neill added.

“He’s now a horrible dictator who causes people unknown levels of pain and suffering day in day out, and look at me here now doing something similar, you just never know how life is going to work out, do you? It’s gas,” shared former Irish college roommate of Kim’s and current Dublin city clamper Rory Ahern.

WWN’s requested a comment from the North Korean leader on his time in Achill, but he declined to comment.