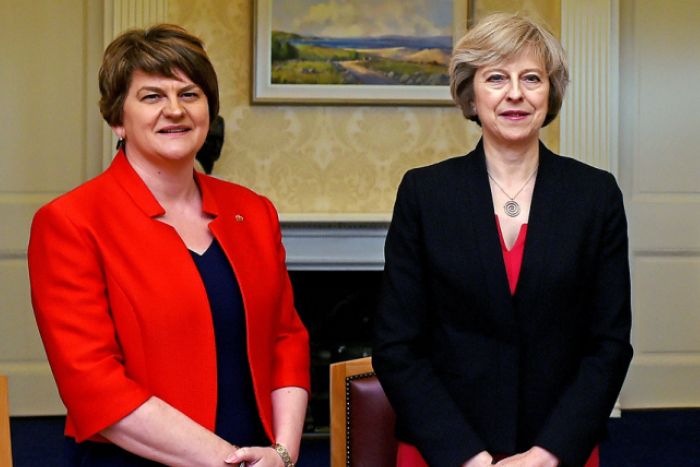 AS news that the once agreed upon agreement to agree to a coalition has once again turned out not to be an agreement at all, an increasingly desperate British PM Theresa May has asked the DUP what height of vertical lift they would prefer her to reach.

Becoming short of breath and requiring brief rests, May spent much of the morning crouching down hunkered down by her ankles before repeatedly pushing off the ground in an attempt to jump to a height that the DUP leader Arlene Foster finds acceptable.

An agreement was briefly reached before the DUP explained the Prime Minister wasn’t allowed any running jumps.

PM May utilised some of her expert negotiation skills with 10 DUP MPs leading to the DUP running rings around the Conservatives, which has proved of great comfort to the British public as Brexit negotiations with 27 separate EU member states should prove easy in comparison.

“Theresa walked in and did what any reasonable and seasoned negotiator would do, she dropped her knees and begged the DUP while handing over a blank cheque,” a source close to the PM shared with WWN.

However, despite PM May’s expertise in the area of sealing deals, the DUP remain staunchly committed to only accepting a blank cheque if it comes with a promise that the British government will renew its collusion with Loyalist terrorists 2while making it legal for the DUP to hate gay people.

The negotiations have once again put into the spotlight the thorny issue of marriage laws, as the British public is now more than ever willing to outlaw same-ignorances marriages as well as marriages of conveniences.