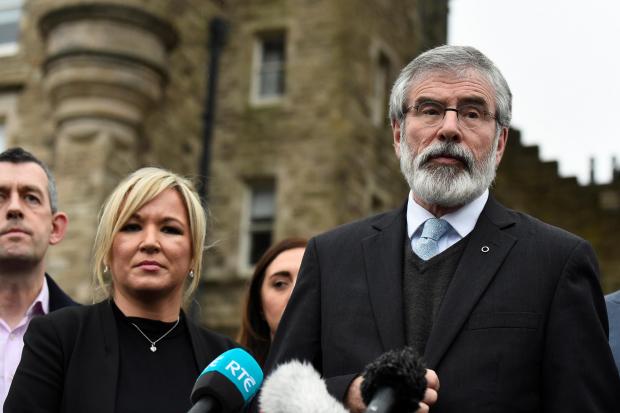 SINN FÉIN has officially thanked the DUP for undertaking the role of most distrusted political party across Ireland and Britain, after the Arlene Foster led party unwittingly thrust the Unionists into the spotlight in the British media.

“Oh, it’s good to have a day off for once,” explained head of Sinn Féin’s Denial Unit Cathal Geeney, “and in fairness, it’s lovely to see British people finally realise the DUP, their bat-shit policies and beliefs, and even Northern Ireland itself exist”.

With vast swathes of the British media drawing up handy guides on the history and policies of the DUP, many people are learning that while they’ve instinctively distrusted and disliked Sinn Féin for decades, there was an equally unlikeable political party also operating in Northern Ireland.

“If we had known people would have had such a reaction to finding out the DUP existed, we would have urged the Tories to properly cock up an election years ago,” Geeney added while attending the thank you ceremony, which saw Sinn Féin members hoist 100,000 Irish flags over Stormont while playing a non-stop techno version of Amhran Na bhFiann.

“Sure look, we’re not even going to make the news with this, Gerry Adams is in there riding around on a waxwork of the Queen like she’s a horse and all the media will report on now is how homophobic the DUP are, how bad they are for Britain,” added Geeney, looking a relieved man now he finally had a day off from having to answer questions on Sinn Féin’s own myriad problems.

Elsewhere, Sinn Féin could be in serious trouble after police have confirmed they are investigating possible voter fraud and impersonation in Derry following Sinn Féin’s historic Foyle seat win, which saw the party wrestle the seat away from the SDLP who had held it since 1983.