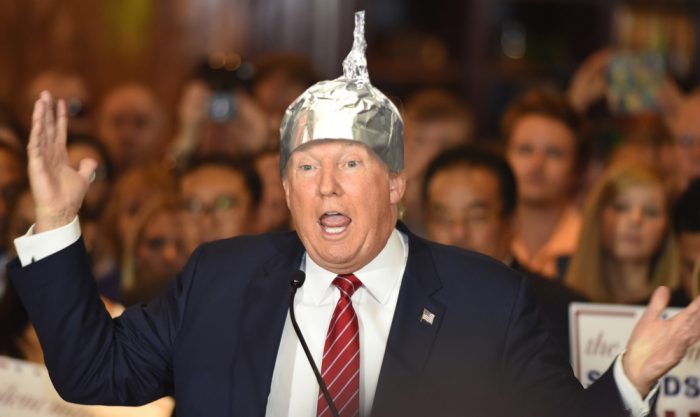 TAKING to the stage in Green Bay, Wisconsin, several hours earlier than scheduled a flustered looking Donald Trump implored a crowd of his supporters to remain vigilant for any signs of the nefarious reptilian creatures seeking to ensure he is not elected president of the United States of America.

Dressed in his usual attire of a crisp suit, red tie and tinfoil hat, Trump spoke at length, in increasingly breathy sentences of how America was being undermined by incredibly wealthy individuals who were using their billions to steer the country towards utter and total ruin.

“I have to say this here and now, for fear it may be the last chance I get before the reptilian conspiratorial elite assassinate me,” Trump said as he began crouching behind his plinth while scanning the room for snipers.

“If I am not elected it will be down to a conspiracy, let me tell you, it’s true, it’s true. It won’t be because of the sexist, racist and xenophobic things I say. It won’t be because of the legitimate questions about my knowledge of economics, foreign policy, health, science or even the difference between right and wrong. It will, believe me, I’m telling you, it will be because we are ruled by a shadowy alien race,” Trump explained, leaving out another 4,567 allegations of heinous behaviour levelled at him.

The Republican candidate then urged his followers to purchase Trump branded tinfoil hats to avoid the illuminati being able to scan their brains.

“I’m not crazy, you’re crazy,” Trump then an apparition of his deceased father that appeared before him, and only him, for a brief moment.

“These reptiles will stop at nothing, they will even use my words and reproduce them in their correct context in the mass media, it’s insane,” Trump concluded to applause.

Today marks the 153rd day in a row legitimate questions about Hillary Clinton and her candidacy have taken a back seat to news about just how crazy and deranged Donald Trump has become.