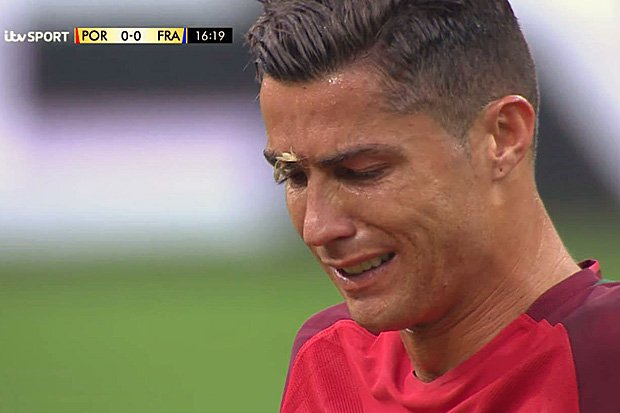 WWN brings you the last installment of its Euro 2016 coverage.

An urgent flood warning was issued by Parisian authorities after they learned Ronaldo was shedding tears at a rate of gallons per second following his injury in the 24th minute. A partial evacuation of the stadium was ordered after sections of the River Seine burst its banks, unable to take on the extra water.

The Messi v Ronaldo debate was finally settled by Portugal’s victory in the final, with Ronaldo, stretchered off after 24 minutes without putting his stamp on the match proving once and for all he ‘does it’ in big games for his country when it matters most.

Many people were moved and amused by the presence of a moth on Ronaldo’s face as he lay on the ground injured. With the moth trending worldwide after trying to console Portugal’s captain, it has since been signed up to model for Calvin Klein and an exclusive tell-all autobiography is in the works. The moving story of an unlikely friendship between Ronaldo and a moth will be turned into a movie by Pixar, with Daniel Day Lewis to play the role of the moth.

Didier Deschamps became the first manager in the history of football to be criticised for taking off a player who plays for West Ham, Dimitri Payet, and replacing him with a player plying his trade at German football giants Bayern Munich, Kingsley Coman.

With the match seemingly passing by players on both teams, Ronaldo sacked Portugal manager Fernando Santos as part of bloody coup and proceeded to take charge of his national team there and then on the sideline.

Further evidence that in real life the bad guys always win, Pepe was voted man of the match for his performance in the final, and was on the receiving end of zero successful assassination attempts throughout the tournament.

Eder’s winning goal lit up an otherwise disappointing match. The shot, struck from distance, saw France’s Umtitti come in for criticism for jumping and turning his back in a similar fashion to 6-year-old Gavin McKinley, whose pathetic performance for Tramore Celtic on Saturday brought shame upon his family, especially his father who will never forgive or forget. Do you hear me Gavin? I’m still fucking livid with you.

Portugal’s goalkeeper, Rui Patricio, made several crucial saves during the final, which came in for sharp criticism from Ronaldo who had explicitly told his teammates not to outshine him during the final.

Many fans have maintained throughout Euro 2016, that the tournament was disappointing and was lacking in quality. However, such claims were rubbished by Portugal who were worthy winners after managing to win just one match in 90 minutes over the course of the tournament.

RTÉ paid an emotional tribute to John Giles after the veteran pundit cast his eye over his final tournament for the broadcaster. To honour Giles, RTÉ played a 13-hour long clip of the pundit failing to correctly pronounce footballers’ names.

Eamon Dunphy had to be restrained after becoming emotional, clinging onto Giles’s ankle as he attempted to leave the studio. The broadcast was cut moments after Dunphy could be heard sobbing ‘don’t leave me, baby’.