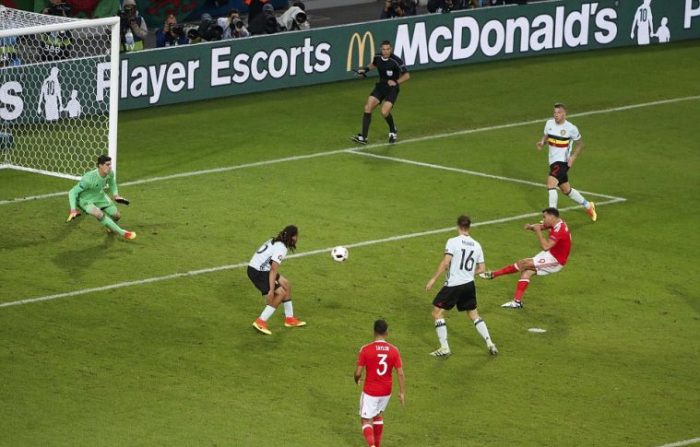 WWN brings you all the latest from Euro 2016 which will now see Wales given the opportunity to wipe that smug smile off Ronaldo’s face in the semi-finals.

Wales shocked many people by pulling down Belgium’s pants in front of the footballing world and then applying one of the most violent wedgies ever record on camera.

The goal failed to rattle the Welsh team who grew into the game and took control, leading to Ashley Williams’s equalizer. The goal, coming from a corner, saw Man City and Belgium’s Tintin criticised for moving away from the goalpost, allowing Williams’s header to pass him by.

Belgium manager Marc Wilmots, fearing he would keep his job if he didn’t lose in really embarrassing style, chose to sub on Marouane Fellaini as the game was lacking someone who had an ability to make your granny look good at football by comparison.

On this occasion Fellaini’s elbows failed to deliver, leaving all Welsh faces intact.

Hal Robson-Kanu’s goal was a sublime piece of football, which left 3 of Belgium’s defenders needing counselling after the former Reading player outwitted them all with a Cruyff turn.

Robson-Kanu will now be the subject of a €150 million bid from Real Madrid despite being a free agent.

Aaron Ramsey is set to miss the semi-final after the referee took a hardline stance against shit haircuts, which saw Belgium’s Nainggolan receive the same punishment.

Wales celebrated their win on the pitch with a traditional Welsh huddle and impromptu break dancing by a photographer, a tradition which first emerged in the late 1600s.

A record number of people are believed to be asking their parents if their families have any Welsh ancestry. Meanwhile, English football pundits and journalists who watched the Wales match took the opportunity to point out if little old Wales could progress in big tournaments why couldn’t England, and in the process missing the point entirely.

Italy’s passionate manager Antonio Conte will be placed in Hannibal Lecter style restraints on the sideline to avoid a repeat of the Spain match which saw the soon-to-be Chelsea manager enter the field of play several times to kick a ball in anger and gesture in a wild and stereotypically Italian manner.