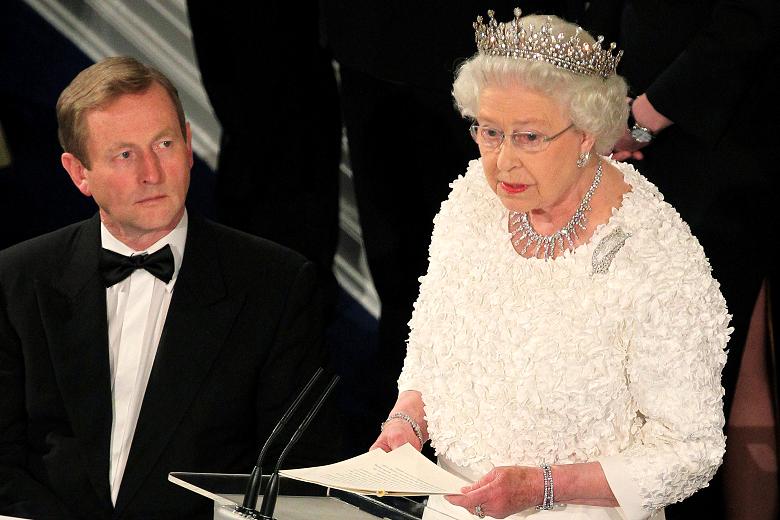 BRITAIN’S Queen Elizabeth II has today officially handed over the deeds to Northern Ireland back to the Republic of Ireland, in one of the most memorable and emotional ceremonies of the past 100 years.

Flanked by party leaders from both sides of the border, the 90-year-old monarch thanked the people of Northern Ireland for remaining under British rule for so long, and apologised to their Republic counterparts for all the atrocities over the past 70 years.

“Our proud nations have been through thick and thin together,” the teary-eyed Queen began, as a montage of black and white pictures animated Northern Ireland’s civil rights struggle and violent past. “So forgive me if I appear a little emotional, it has been a long road for everyone here. It is my honour to hand over the six counties, Antrim, Armagh, Down, Fermanagh, Londonderry, Tyrone and all its financial woes over to the Republic of Ireland”.

Receiving the deeds to the now former part of Britain, Taoiseach Enda Kenny echoed Queen Elizabeth’s words, before then thanking her for finally releasing Northern Ireland back to Ireland.

“Eh, now hang on a second there Liz,” a panicked looking Fine Gael leader said as the Queen exited the ceremonial stage and into an awaiting car, moving quicker than expected for a 90-year-old.

“I was told I was just being invited up for tea and biscuits, what if we don’t want it back,” Kenny now covered in a mixture of tears and panic sweating.

“We’ve been tricked, I fucking told you this would happen,” Kenny whispered to an aide as Gerry Adams rushed the stage in a failed attempt to prise the deeds from the Taoiseach’s hands.

Moments before that Prince Phillip was seen comforting the emotional Queen before attempting to ease the smooth transition of ownership by commenting on a foreign looking man in the audience, and calling Enda Kenny an ’empty-headed, bog-dwelling neanderthal’.