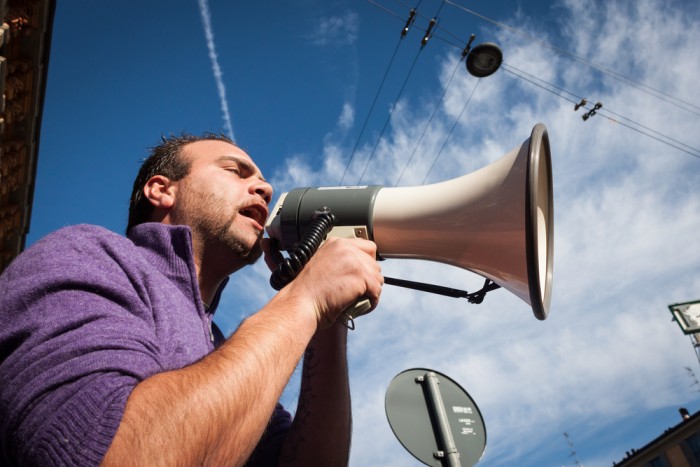 IN a truly unprecedented turn of events, an anti-government protester has been handed the job of Taoiseach, following the resignation of Enda Kenny and the fruitless subsequent attempts to find a new leader for the country.

Fine Gael leader Enda Kenny stepped down as Taoiseach a month ago after failing to garner enough support from the house, followed by similar failures from Micheál Martin, Gerry Adams, and Richard Boyd Barrett.

In a second attempt to appoint a Taoiseach today, the vote went through each of the 154 TDs in Leinster House before moving to the next eligible person in line, which happened to be a Malcolm ‘Commie’ Hennessey, a long-time protester who frequently eggs TDs cars and has chained himself to the gates of Leinster House on several occasions.

Taoiseach Commie was initially in shock when officials told him he would be running the country from now on, and only believed the news when Dáil staff ushered him to Áras An Uachtaráin where he was sworn in on the spot by Michael D. Higgins.

“Yeah, eh, I was just out the front of Leinster House with a placard that said ‘fuck water charges’ when they told me I was Taoiseach,” said Hennessey, who stands against everything and everyone in Irish politics.

“Seems I was the next in line, somehow. Anyways, it’s great to be Taoiseach, I suppose… I’ll definitely do a better job at running the country than anyone else ever has. I have an extensive history in giving out about everything and I’m sure all my policies will have the country running at peak efficiency with happiness for everyone in like, a week tops”.

A national day of protest at the election of Taoiseach Hennessey has already been organised by his fellow protesters and will take place on Sunday.