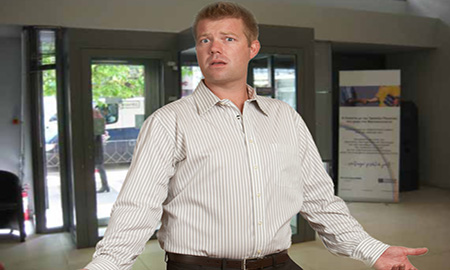 A BRAVE Waterford man has opened up to WWN and detailed the horrific seconds he spent in the entry porch at a branch of AIB, waiting for the light on the door to go green so he could enter the building.

James Hunterly, 36, spent an agonising 3 seconds waiting for the outside door of the porch to close, leaving him with no option but to stand there and accept that he wouldn’t be applying for a new credit card as quickly as he would have liked.

Hunterly has approached the Waterford branch of AIB in pleasant mood, thinking that he could just stroll in, fill out a form and be out in five minutes or less.

However, as he approached the building he noticed that it has “one of those sets of doors” that are standard for banks today, and began to doubt that his visit would be as easy as he initially thought.

His fears were confirmed when he entered the booth, and found that the inside door had a red “stop” light illuminated. It was at this point that Hunterly knew he was in for a harrowing wait of maybe 3 seconds or more.

“You can see what’s happening, but you’re powerless to stop it,” said Hunterly, rescued from the booth after 3 seconds by an elderly lady who was on her way out at the time.

“You find yourself in the cubicle booth porch thing, the way is blocked, and you just know; I have to wait until this outside door slowly swings shut before I can go any further. And there’s nothing, nothing you can do about it”.

Suitably chastened by his dreadful experience, Hunterly waited until the bank was closed at 5pm and left with the staff, to prevent being trapped inside the porch again.