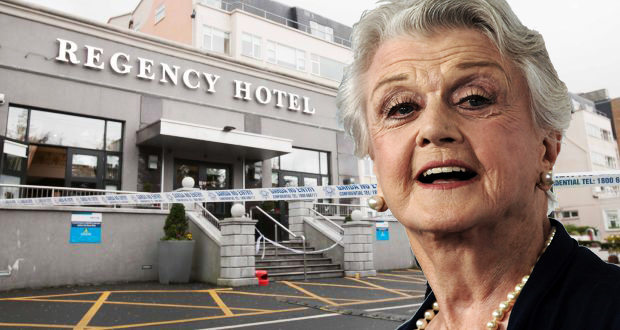 VETERAN British actress and honorary Irish citizen Angela Lansbury has been approached by An Garda Síochána and has agreed to use the skills she learned on “Murder, She Wrote” to help solve the recent spate of murders in Dublin.

Lansbury, 90, was in Dublin yesterday to collect a lifetime achievement award at the Bord Gais Energy Theatre as part of the Audi Dublin International Film Festival. It is believed that she left the event and went straight to the Regency Hotel, to see if she could find any clues that would help investigations into the murder of a gang member murdered at a boxing weigh-in event a fortnight ago.

Bringing back the investigative powers she used playing amateur sleuth Jessica Fletcher for nearly 20 years, Lansbury visited the scene where a second man with connections to the Dublin drug trade was gunned down, while a senior member of the guards shook his head and told her she was wasting her time.

“I thought there was a lot of murders in Cabot Cove, but Dublin is getting ridiculous,” said Lansbury, taking a break from snooping around where she don’t belong.

“But I think I’m close to cracking this case. All I need to do is organise a meeting with the senior members of each gang, then I can trick them into confessing to these crimes while the cops are listening. The bad guys get arrested, and the rest of us have a big laugh about it down at the station.

“It’ll take about an hour, tops,” she added.

UPDATE: We’re receiving word that a man linked to the shooting in the Regency Hotel has handed himself in to the guards, after realising it was only a mater of time before Lansbury caught him.