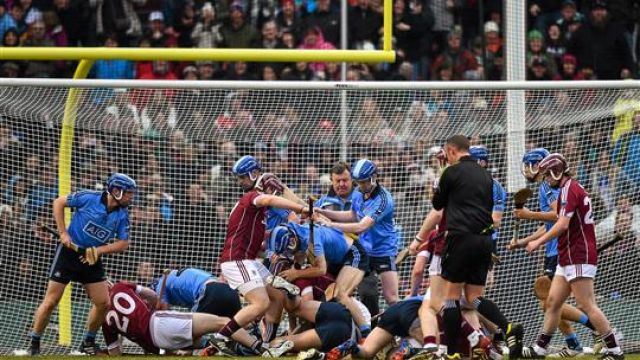 AN EXHIBITION fight scheduled by the GAA between Dublin and Galway in Boston this weekend descended into an embarrassment for the Gaelic association as both teams partook in what onlookers called an ‘unsavoury looking’ hurling match.

The fight, attended by 28,000 fans, was expected to be a wonderful showcase for the GAA’s flagship game of mass brawling, but as tempers evened out members of both the Dublin and Galway teams took up nearby hurls and broke out into a frantic game of hurling.

“No one likes to see this sort of thing, I brought my kids along to see their first GAA fight and I’m disgusted,” explained Donal Kennedy, an Irish Boston resident.

“I’m originally from Cork and I thought I could show the kids a great part of their Irish heritage,” added Kennedy, who was angered by the outbreak of measured skill, pace, and accuracy shown by some of the players who scored several points, before the referee intervened.

It is unclear what actions the GAA will take, but a brief statement issued by the organisation in the aftermath of the disturbing hurling scenes suggests little will be done.

“When fighting, it is not uncommon for players to want to let off a bit of steam, if they hurl, they hurl. I think it would be a bit over the top to sanction anyone,” the statement read.

Not everyone who attended the fight agrees with the GAA however.

“Jesus it must have taken 5 minutes to get all the players fired up enough again to go out and carry on fighting. Like, there were gasps, and screams of horror when one fella scored a goal. I was watching through my fingers, it was horrible” added travelling, fighting fan Deirdre Finnerty, “I’ve asked for my money back, no one goes to a fight between Dublin and Galway expecting to see what I saw, I’m genuinely disgusted”.