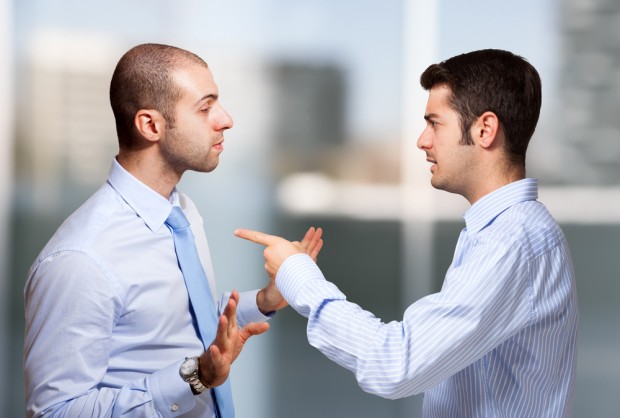 IF something isn’t quite going right in your life, and the blame lies firmly at your feet, it can often be easier just to blame absolutely everyone else but yourself. WWN provides an essential and extensive guide to doing just that.

The Government. Repeat those two words over and over again, and you’ll never have to take responsibility for any of your actions ever again. Anything from a range of issues, choices, bad luck and mistakes can be blamed on the Government. From stubbing your toe to robbing a bank, it will be the Government’s fault somehow, if you’re willing to put enough effort into deluding yourself.

Your parents. A classic back up to the Government in attributing blame that should really go to yourself. They didn’t sign you up to Chinese language classes when you were 6 months old, no wonder you can’t find a decent job you enjoy. The bastards. And would it have killed them to pay for piano lessons, I mean, sure, you could pay for them yourself now, but they were your parents. They were supposed to look out for you!

Shouting at other people and things is also a really valuable skill set when needing something or someone to take the fall for what was obviously your own error or mistake. Never give out in a measured and calm fashion about how someone tricked you into failing an important exam or not getting that job.

Whatever you do, don’t be honest with yourself. Find the nearest person to you, and begin a lengthy rant about how it’s someone else’s fault that you got caught importing elephant tusks by forcing prostitutes to smuggle them through customs up their you know whats, otherwise if you’re left alone with just your own thoughts for a minute, you may end up conceding that you’ve only yourself to blame.

Possessing absolutely no self awareness is key to being able to point the finger of blame for something going wrong in your own life, personal or professional, in the direction of anyone except yourself. Have you just punched a 79-ear-old woman in the face because she skipped you in a queue in the chipper? Well, obviously that has nothing to do with unresolved anger issues and everything to do with ‘some people’ who just think it’s ‘okay’ to ‘skip queues’.

You should read up on your conspiracies too, as there’s no better way to dismiss notions of responsibility for your own actions. Drink driving convictions, slight tax evasion and embezzlement can all be put down to being a victim at the centre of an elaborate conspiracy.

Finally, setting your default stance in discussions, disputes and arguments to utter denial will be essential in refusing to take the blame for anything. Works perfectly against accusations of not cleaning up after yourself in the kitchen as well as less serious matters such a genocide.