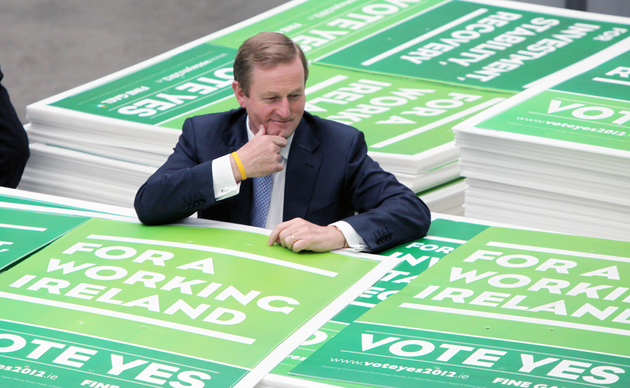 THE Government has given the clearest indication yet that it would really like to be reelected by announcing a new Capital Expenditure Plan (CEP) a year earlier than it was scheduled to be announced.

The CEP, also known as Please Vote For Us We’re Spending Loads On Infrustruture Plan, will see €27 billion allocated to vital areas of the Coalition’s reelection strategy.

With plans to build Metro North, which was cancelled several years ago and has now been chosen ahead of a more favourable DART Underground plan, the Government has secured vital funding for arguments their candidates can make on voters’ doorsteps in the run up to the impending election.

“We wanted to give our candidates every opportunity to be able to tell voters ‘we’re building some train yoke to the airport, give us your vote’,” explained Fine Gael strategist Finlay Fallon, who admitted to leaning heavily on tricks from a pre-election playbook which was left behind in Leinster house by previous Fianna Fáil governments.

Political commentators have confirmed that the Government’s decision to cut the CEP program for 2011-2016 short by a year so they could introduce a new CEP for 2015-2021, is probably not a cynical election ploy at all and simply to work of tireless politicians.

Voters have responded positively to the news, with some projects announced long overdue.

“Ah no it’s great, like that Metro North is due in 12 years time, I can’t wait. And sure when it arrives over budget and 5 years late, I’ll have completely forgotten who gave it the green light or the fact that there were better plans rejected,” adult man and voter Ciaran Cullen told WWN.

Opposition parties have criticised the move, purely out of jealousy for the fact that they don’t have €27 billion worth of State funds to dangle in front of voters like a carrot.