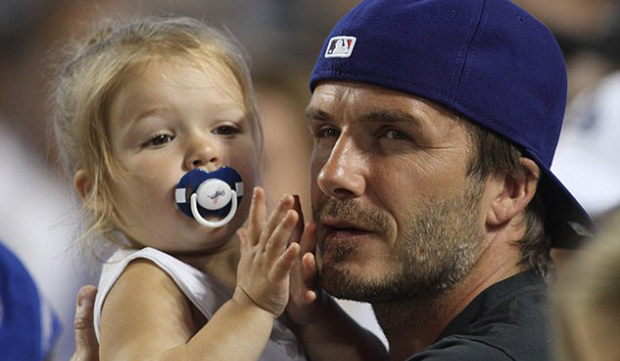 A SPOKESPERSON for celebrity couple David and Victoria Beckham has confirmed their four-year-old daughter was admitted to rehab late last night for pacifier addiction.

Harper Beckham, who was exclusively exposed by investigative journalists from the Daily Mail this week, is to undergo an intensive 8-week program to help wean her off the soother, which she has been addicted to since birth.

“It started with the breast and she just worked her way up the addiction chain,” the Beckham spokesman told WWN this aftermorning. “Both David and Victoria are very embarrassed by this whole ordeal. They will miss her dearly over the two months, but that’s the sacrifice they will have to make to right this wrongful behaviour”.

Recent figures released following a survey into pacifier addiction revealed that almost 2 in every five children are secretly addicted to some form of pacifier, whether it be a soother, blanket or thumb.

“A mother’s breast is a gateway pacifier,” leading expert in childhood addictions, Prof Kieran Tracey explained. “It starts with the tit and can lead to smoking, alcohol addiction and even heroin addiction in later life.

“The Beckhams are lucky they are treating the addiction at such an early age,” he added with his mouth.

Harper Beckham was admitted to Hollywood’s infamous Betty Ford rehab clinic for children at 10pm last night and is expected to remain there without any contact with friends or family for 8 weeks. The clinic boasts a 93% success rate and has treated dozens of celebrity children, including Tom Cruise’s daughter Suri for an addiction to sucking lumps of coal.