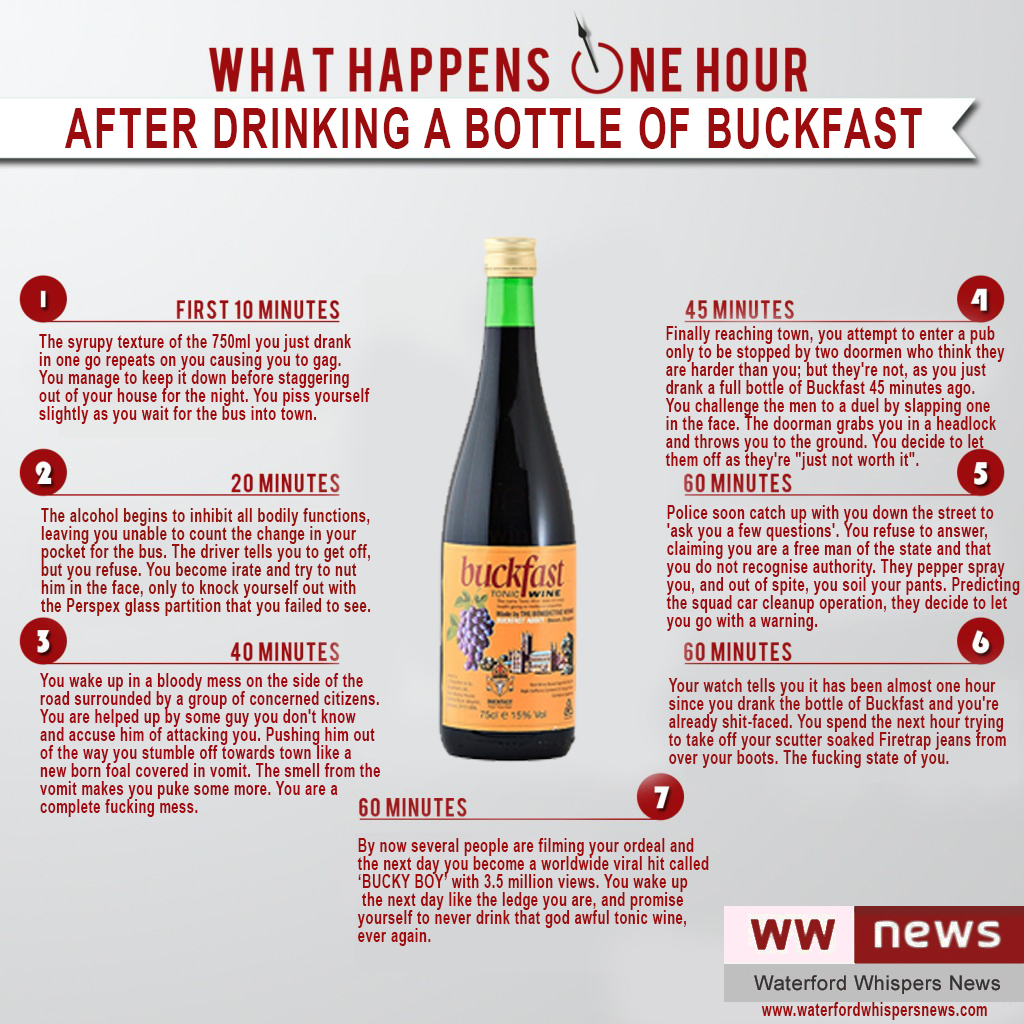 A COUNTY Waterford pharmacist has shocked tonic wine fans by releasing a step-by-step guide to the dramatic way a bottle of Buckfast affects the body from 10 minutes after the first sip until an hour later:

The syrupy texture of the 750ml you just drank in one go repeats on you causing you to gag. You manage to keep it down before staggering out of your house for the night. You piss yourself slightly as you wait for the bus into town.

The alcohol begins to inhibit all bodily functions, leaving you unable to count the change in your pocket for the bus. The driver tells you to get off, but you refuse. You become irate and try to nut him in the face, only to knock yourself out with the Perspex glass partition that you failed to see.

You wake up in a bloody mess on the side of the road surrounded by a group of concerned citizens. You are helped up by some guy you don’t know and accuse him of attacking you. Pushing him out of the way you stumble off towards town like a new born foal covered vomit. The smell from the vomit makes you puke some more.

Finally reaching town, you attempt to enter a pub only to be stopped by two doormen who think they are harder than you; but they’re not, as you just drank a full bottle of Buckfast 45 minutes ago. You challenge the men to a duel by slapping one in the face. The doorman grabs you in a headlock and throws you to the ground. You decide to let them off as they’re “just not worth it”.

Police soon catch up with you down the street to ‘ask you a few questions’. You refuse to answer, claiming you are a free man of the state and that you do not recognise authority. They pepper spray you and out of spite you soil your pants. Predicting the squad car cleanup operation, they decide to let you go with a warning.

Your watch tells you it has been almost one hour since you drank the bottle of Buckfast and you’re already shit-faced. You spend the next hour trying to take off your scutter soaked Firetrap jeans over your boots.

By now several people are filming your ordeal and the next day you become a worldwide viral hit called ‘BUCKY BOY’ with 3.5 million views. You wake up the next day like the ledge you are, and promise yourself to never drink that god awful tonic wine, ever again.