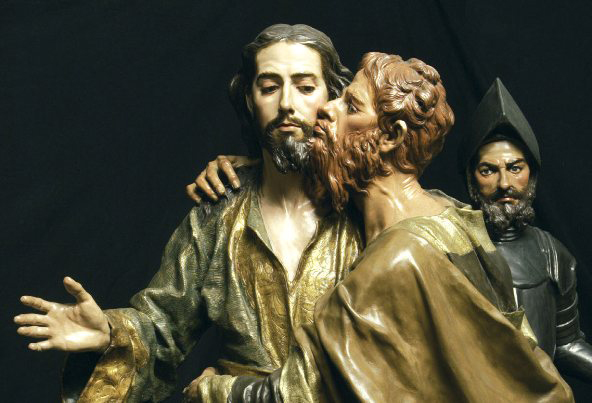 NEW evidence released this week claims Judas Iscariot, one of the twelve original disciples of Jesus Christ, was a ‘raging homosexual’ and tried to force himself on the son of God numerous times.

According to a manuscript almost 2,000 years old unearthed in The Vatican vaults, Judas regularly made advances on his fellow apostles, and was quoted as saying he would “kiss Jesus on the lips at some point, whether he liked it or not”, no matter what the consequences.

“It appears Judas had a thing for our Lord Jesus Christ for quite some time,” director of the Holy See Press Office Federico Lombardi confirmed. “So-much-so that he ended up betraying Jesus to the Romans after turning down his sexual advances. Hence why the Catholic religion frowns upon such practices today”.

Fr. Lombardi explained there were several explanations in the past as to why Judas betrayed Jesus, but this latest find details his four year long crush on Jesus in stunning detail.

“Judas was always the first of the apostles to volunteer in washing the Lords feet,” he said. “There are also references made by the traitor on Jesus’ physique, claiming the Lords abdominal muscles were quite ripped for his age and how he used to dream about rubbing ointment on them after supper”.

“Following several years of harassment, Jesus eventually told Judas, he wasn’t into that kind of thing and urged him to stop watching him bathe as it was getting a bit creepy,” added Lombardi. “Being a gay, Judas didn’t take rejection well and ended up betraying Jesus by kissing him in the garden of Gethsemane – embarrassing him in front of his apostles and a band of Roman soldiers”.

According to the ancient manuscript, the first ever homosexual mentioned in the bible was so struck down with emotion after betraying his love, that he then took his own life, before descending into hell.

“Jesus died for the sins of all mankind,” concluded the Vatican spokesman. “Womankind? Not so much”.