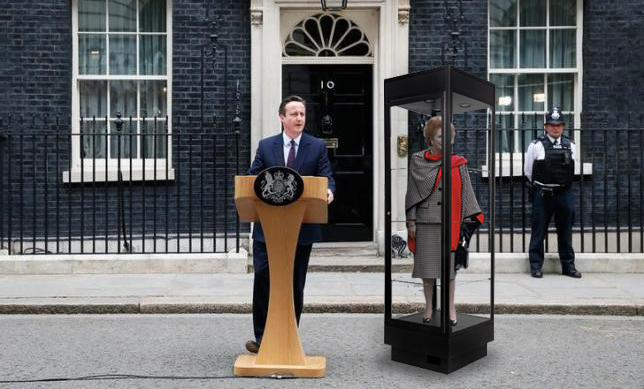 At 10am, in front of a large media presence, the reelected Tory leader announced new powers to tackle radicalisation, saying the UK has been a “passively tolerant society” for too long and it was time to “go back to the 1984 way of thinking”.

Holding a pully to a large veiled box to his left, Mr. Cameron calmly tugged its black satin sheet to the ground, displaying a rather grey but very recognisable Margaret Thatcher.

“What better way to begin our new policies than under the watchful eye of our once great leader, Baroness Margaret Thatcher,” he said, grimacing slightly in an attempted smile. “She may be stuffed, but as long as she stands in the corridors of number ten behind me, this Tory government will promise to stay true to its origins and clamp down on the poisonous extremist ideology that has torn our country apart”.

The British leader then announced a bill that will include new immigration powers to close down premises used by extremists, including mosques, community centres and anywhere they bloody see fit.

“We vow to clamp down on hate preaching by preaching against anything we can conveniently classify as hate,” he added, before bizarrely glancing at his taxidermied protégé in an emotional gesture of alliance. “Hopefully this old girl will bring us good luck over the next five years”.

Sources close to the Tory government confirmed the display case containing Mrs. Thatcher will feature in the lobby area of Number t10 to greet visitors and heads of state. It is believed to cost the British taxpayer £1mn per year to maintain.