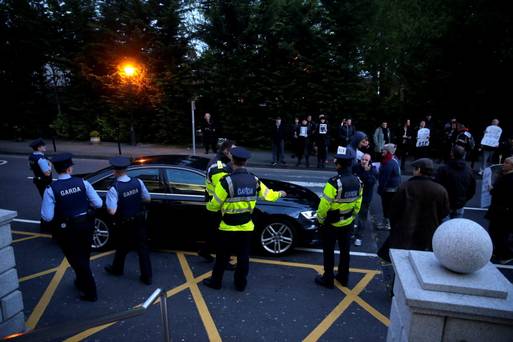 A GROUP who staged a sit down protest in front of Joan Burton’s car last night have admitted that they’re just taking the piss at this stage.

The Tánaiste’s ministerial car was blocked last night as she left a public meeting calling for a Yes vote in the upcoming Marriage referendum.

This followed the notorious incident last year in which the Labour leader was held up for hours in Jobstown, when anti-water charge protesters sat in front of her car.

Although protestors have stated that they blocked her in to highlight their case against the hated water levy, some have admitted that they’re just doing it for the mess.

“Ah it does be funny enough to see her there, trying to go about her ministerial duties while we lie down in front of her,” said Colm Hagan, chief spokesperson for the “Let’s Piss Joan Off” group.

“Her face says it all; it’s just this look that says ‘I really have better things to be doing than sitting here’… and granted, she probably does. But it’s just a gas to block her in until the guards come and move us, which in turn gives us a chance to cry about police brutality”.

The group has stated that they have no intention of stopping the sit-down protests whenever they can, adding that even if water charges “were reversed in the morning”, they’d still just do it for the fuck of it.