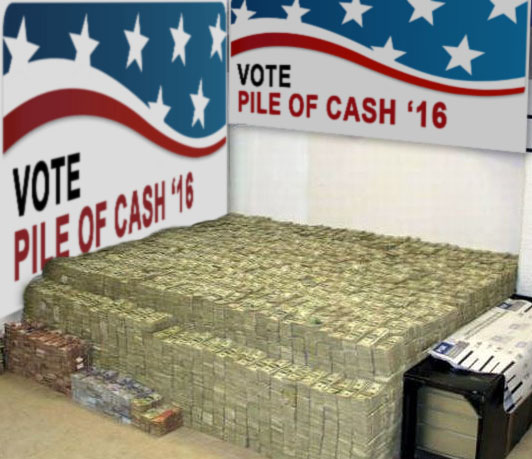 A LARGE stack of money has announced that it will make a run for the White House in 2016.

The pile of cash, estimated to be around 1.2 billion US dollars, said yesterday at a special press conference in Washington DC that it would seek the presidency next year.

“I’m running for the oval office,” the money told a packed conference room. “I will begin my campaign immediately and start touring the United States as early as next week”.

Reports claim the centre of the large pile of money’s campaign pitch will be its “simple approach” to the election process: ‘scaling back on everything but the financial element behind a regular presidential campaign’.

“Why waste time with people and merchandise that are basically just fronts for the real fuel behind a US presidential bid – money,”  said a spokesperson for the legal tender. “Scaling back to the bare essentials is the way forward. Money talks so why not let it run for office?”

It is believed the $1.2bn will also stress its attempt to become the first ever stack of cash to sit in the Oval Office.

“We expect its value to drop to seven hundred million by election time, but it will be enough to sustain a four year term as president”.