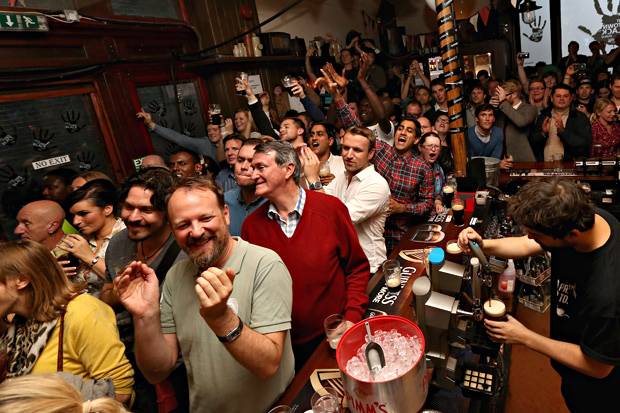 WATERFORD barman James Jones has warned today that fat guys who played rugby once in college will more than likely talk absolute shit for the next six weeks due to the televising of the Six Nations.

The 37-year-old bar manager stated that hundreds of over-weight men wearing tight fitting rugby jerseys with collars erect are due to flood city bars and clubs across the country over the duration of the championship, which kicks off this Friday.

“I tried to get a few weeks off work, but then I realised this crap was on,” he said. “Don’t get me wrong, I like rugby. It’s just the fat morons who shout at the screen that wreck my head. Most of whom will drink only ‘Hino’ or Guinness, cause well, that’s what they’re meant to drink.”

Mr. Jones added that most of the rugby fans he has encountered have always the same old rugby story to tell.

“Christ, if I hear one more school or college rugby story I’ll shoot myself,” he explained. “It always starts the same: ‘When I was playing for the school I was positioned.. bla-bla-fucking-blah.

“Then it usually ends with the guy, who had it all, in tears telling everyone about his horrific knee injury that ‘ruined his career’, which obviously explains why he’s such a fat cunt now drinking Heineken at the bar.

“It’s the incessant shouting at the TV that really cramps my balls. Seriously, shouting drunk at a TV in a pub miles and miles away from the game is not going to change anything. It’s like they’re all trying to out-shout one another. Who can say random sports shit the loudest?”

“Pass it! He should have ran with it, stick it up his hole!”

The father-of-two also warned fellow bar staff to be extra careful when pulling a pint of Guinness as rugby fans are renowned pint connoisseur’s.

He concluded: “I urge pint pullers across the country to put that extra effort in when pouring the black stuff as these guys are professionals – not only on the game itself – but also on how to pour a pint of Guinness. They know more than you do about it.

The Six Nations will start on the 6th of Feb and will run over six weeks to the 21st of March.