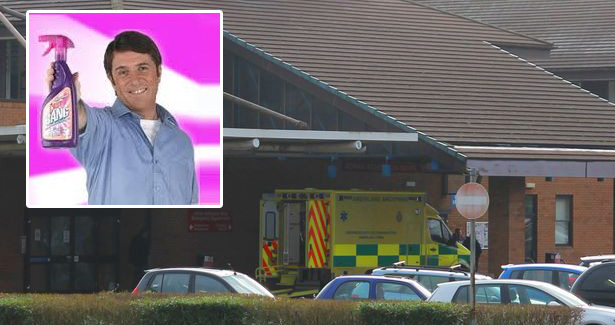 POLICE in England are this morning appealing for information after renowned house-cleaning enthusiast and Cillit Bang spokesman Barry Scott was rushed to hospital following a suspected overdose of the household spray.

Scott, 27, was admitted to A&E in the early hours of this morning after friends found him slumped on the floor of his kitchen. He had been cleaning at the time. Although details are scarce at the moment, Scott was said to be “awake, coherent, and spotless” when he was being put in the ambulance at his home.

It is believed that Scott may have become addicted to the fumes emitted by the heavy-duty kitchen sprays and liquids during his 8 year stint as a spokesperson for the market-leading Cillit Bang, during which time he coined the company’s motto, “Bang! And the dirt is gone!”.

However, Scott was released from the company in October of last year following increasingly erratic behaviour on the set of Cillit Bang commercials, including an infamous incident in which he demanded that his catchphrase be changed to “Dirt can suck Cillit Bangs dick”.

“We at Cillit Bang are deeply saddened by this news of our former colleague” said Martin Bang, co-owner of Cillit Bang.

“We thank Barry for his years of service, and wish to offer him the help he needs to get his life back on track following his battle with addiction. We would also like to take this opportunity to tell customers about our new Mildew and Mould Grout spray; ideal for bathrooms, kitchens, mosaics and more”.

It is believed that Scott will remain in hospital over the weekend, at which time he is expected to check into a rehab clinic to get himself cleaned up.