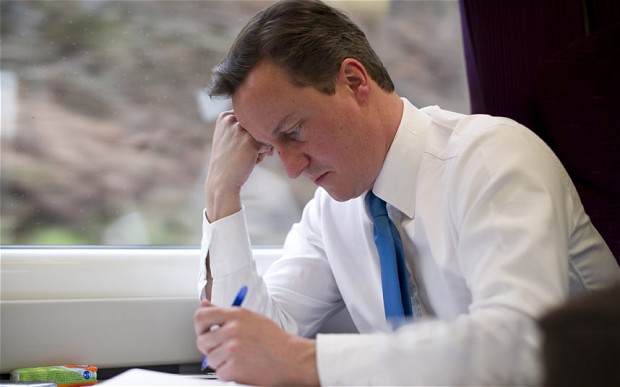 WWN has reproduced below an unedited version of the open letter to UK prime minister has written to the people of Scotland in anticipation of the upcoming referendum this Thursday.

I am writing to you to urge you to vote No this Thursday as we really are Better Together. What a lovely slogan that is, it puts the wind in the sails of the Union, does it not? And it is a simple message, which is something we knew we would need as the literacy rates in Scotland are traditionally quite terrible. ‘Better Together’ has four Es, and four Ts, you can’t say we didn’t try to simplify it. Now my government and I have been accused of being condescending, but honestly Scotland – look up the dictionary and you will find the definition of that word which you will now understand correctly and you will see I am not talking down to anyone.

‘Oh, I don’t like that fucking toff Cameron with his melty skin, which seems in a hurry to leave his face and head south for France’ I hear you cry. But, please, stop! I understand you Scotland, I am a working class, salt of the earth masculine man much like you and your mother. I have watched Trainspotting and would love to see your long line of documentaries continue to prosper – but as part of Britain. You probably didn’t know this, but I was actually in Scotland once and I count Braveheart as one of the films I have watched.

This isn’t about the haves and have nots, it is not about the Us vs Them. This is about the mistake we made in letting you make a decision about something. If I could I would take it back, but I can’t, so all I am left with is an anecdote about the time I ate haggis, a battered mars bar, drank Irn Bru or something similarly Scottish and disgusting. For the record, I enjoyed eating whichever dish appeals to you the most.

‘But you’re a cunt’ I hear some interesting looking person pipe up from the back of the room. Not true, who do you think intervened on behalf of the Scottish people to ensure the current Doctor Who was incomprehensible, that’s right me! See, I know what is best for Scotland.

There has been a lot of fear mongering of late and this something I can’t abide Scotland, I cannae abide it (see I know you, I am you). Yes, it is true if Scotland gains independence you will individually loss £2 million each and Rab C Nesbitt will no longer be available on Scottish TV. A tragedy, we would all like to avoid. Keep Britain, British Scotland, I beg of you. I won’t descend down on one knee as I am better than you and we both know it, but still, please vote No. If you do, we promise to change the prevailing attitudes of all ruling British governments of the last 30 years and start to really care about what happens north of Newcastle. You have my complete and utterly changeable commitment on that. Ahhh, I’ve finished drinking a nice cold pint of Tennants while writing this, honestly I have, how refreshing and Scottish.

Vote No and thanks,