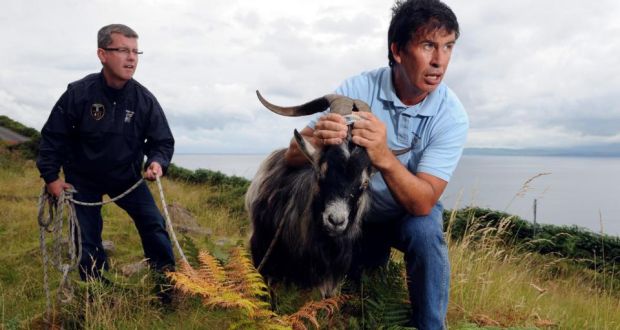 The Puck Fair is set to take place in the coming days in Killorglin but WWN has learned the fair may be in jeopardy with news that the newly crowned ‘King Puck’ goat has already become power mad and is close to becoming out of control.

“We thought it would be grand to hoist an animal 60ft up in the air in a cage, what could go wrong? Honestly,” shared one of the fair’s organisers John J. Flaherty, “we couldn’t have predicted what would happen next”.

The King Puck is, as always selected from amongst the wild goat population of Ireland and the cage is approved by the Department of Agriculture and a vet.

“The signs were there once we hoisted him up,” explained, concerned local resident Billy O’Loughlin, “he starting bleating away demanding we now refer to him as ‘Your Highness Finding Nemo’, he’s a mad Pixar fan or something. Sure, we all agreed it was Finding Nemo from now on, I’m not going to mess with a mind-reading goat King, are you? I hear he can shoot lasers from his eyes”.

The goat King was thought to have developed telekinetic powers after accidentally ingesting some slurry several years ago.

“We’ve only ourselves to blame,” added John J. Flaherty, as he acknowledged that there was a provision in the carter for executions ordered by the King Puck, “that power mad ‘Finding Nemo’ has ordered the execution of several Healy Raes. Our information suggests one of the roads Jackie got laid down a number of years ago was quite literally laid over Finding Nemo’s mother. If we’ve learnt anything from this it is that vets should always check goats for telekinetic powers”.

Among the King Puck’s list of demands were improved image rights relating to his part in promotion work for The Wild Atlantic Way, the latest Sky Digital package – sports and all, a Tolberone, a signed photo of Síle Seoige and additional 300 followers for his nascent Twitter account.

“We got him everything except one of the eejits on the committee got a photo of Gráinne Seoige, jaysus that goat wasn’t happy”.

There is an expectation in Killorglin that the Puck Fair will start as planned on the 10th of August and welcome over 80,000 visitors, provided the army’s expert snipers can take out the goat who is holding court from his cage 60ft above his kingdom.