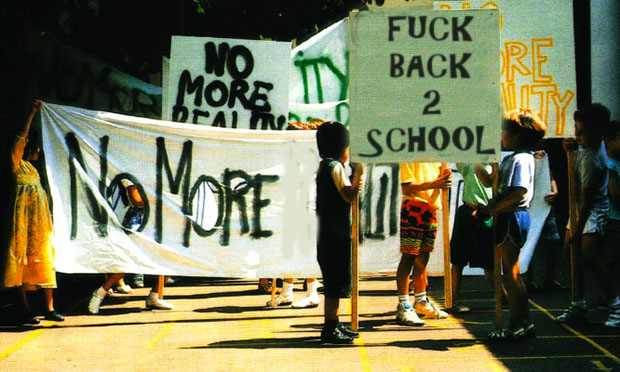 UP to 30,000 young students have taken to the streets this morning to protest over what they call ‘premature’ back to school adverts being run on Irish TV stations.

Gardaí say children as young as five have been arrested in Dublin city centre following outbreaks of violence during the rallies, which some claim were organised by republican groups.

“Some of these children have no idea why they’re even here today,” said one garda at the scene. “Where are the parents? That’s what I’d like to know. I’ve been kicked in the shins and bitten twice already”.

Sources say that over 50 children have already been placed in temporary corners for the moment until gardaí can make contact with their parents.

A spokeschild for the protesters told WWN that further violence may be a possibility if TV stations continue to air supermarket back to school adverts too soon.

“What kind of sick bastards put back to school adverts on in July?” said the 9-year-old. “Who in their right fucking mind would do a thing like that to children on their holidays? Today we are here to protest peacefully, but if people get all up in our face and shit then there will be hell to pay in Dublin city”.

Supermarket giant Tesco’s have already pulled its major television advertising for the new school year, and urged other retailers to do the same.

“We don’t want another Quinnsworth tragedy on our hands,” said Tesco chief James Phealan, referring to a 1992 incident where 546 people were killed in protest clashes in Dublin over a series of Maurice Pratt back to school adverts. “Hopefully we can come to a truce. Maybe we can run some Christmas ad’s instead. I’ts only around the corner sure”.