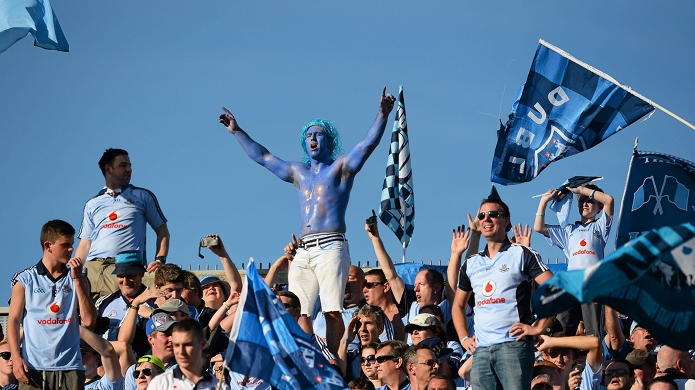 Data collected by the Dublin Supporter’s Club (DSC) reveals that there has been a year on year increase of 10% in ‘stupid, clueless fuckers’ who only choose to support Dublin for a grand total of 1 or 2 matches a year.

“Winning last year and in 2011 has been a blessing and a curse,” explained Anthony Kilbride, a Drumcondra native and active DSC member.

“I was at the Wexford match on the Hill and I had some eejit convinced our starting 15 was made up entirely of long-lost Brogan brothers.”

Kilbride suggested that with the upcoming Leinster football final against Meath, yet more football illiterate bandwagon specialists would descend on Croke Park, seeing some die hard fans having to endure their presence.

“They say ‘ah, this is great, you wouldn’t get this with the football’, they don’t even bother saying ‘soccer’ the heartless idiotic bastards,” Kilbride added now weeping openly.

A long since forgotten by-law contained in All-Ireland Championship rules had a provision specifically created for Dublin fans whereby stewards were allowed to stop and randomly search suspect fans for any non-Dublin paraphernalia. By-law 26a also states that a Dublin fan could be asked a number of questions in order to pass a ‘fan’ test but this is rarely enforced.

“Why won’t the GAA enforce it though?” pleaded Kilbride now sunken to his knees, pulling his hair out, “I saw some kid wearing a brand new Dublin jersey with Neymar written on the back of it, this has got to stop,” he added while continuing to cry.