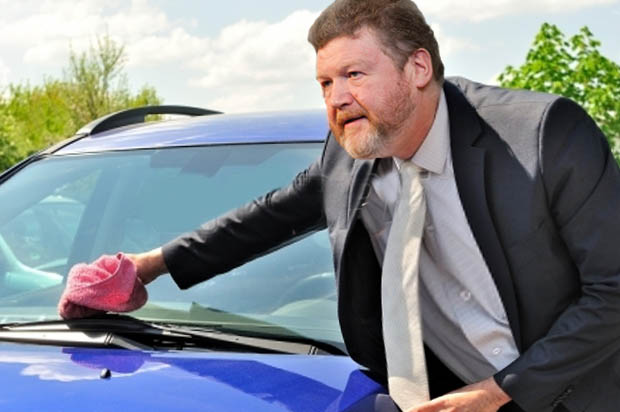 WWN can exclusively report that, in an effort to save his job as Minister for Health, James Reilly has been performing a number of arduous and demeaning tasks for the Taoiseach over the course of the last few days.

It is widely expected that Reilly will lose his position as Minister for Health tomorrow when the cabinet reshuffle is announced, but the sight of him applying a finishing wax to the car bonnet has sparked rumours he may have saved his job.

“He did a fabulous job on the car in fairness, the Taoiseach always has its filthy from the rally races out west, but credit to James, it’s spotless now,” shared a Government Insider.

Rumours circulating the corridors of power in Leinster House suggest Reilly’s decision to clean the car without the usual skimpy bikini fanfare has strengthened his case for staying in his post. Other efforts on the Minister’s part include regularly brushing the Taoiseach’s hair when requested, foot rubs, paying him a compliment every 4 seconds and referring to the Taoiseach as ‘my beloved’.

“Who doesn’t like their ego inflated now and again, the minister may appear to be incredibly incompetent, but he knows how making Enda smile and that goes a long way. His impression of a walrus always has Enda in stitches,” added the insider.

Reilly will find out if his humiliation was worth it sometime tomorrow morning when the reshuffle is made public.