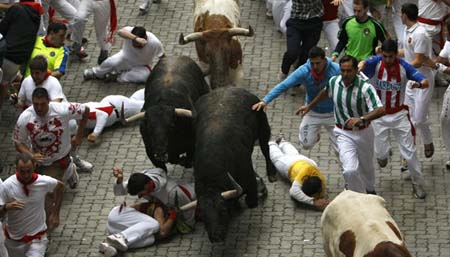 THERE was said to be widespread shock in the Spanish city of Pamplona today after several humans who stood in the path of running bulls were ironically mowed down and gored by the same running bulls that they were running away from.

At least 3,000 revellers took part in the annual event yesterday morning, where six fighting bulls were released onto a street full of people.

“I’m absolutely shocked that people were gored again this year. What are the chances?” said Spanish Red Cross spokesman Carlos Perez. “I mean, who’d have thought that a herd of bulls running through a crowd of people could do such damage. We really weren’t prepared from this.”

Runners, in traditional white clothing and red kerchiefs around their necks, apparently crapped themselves when they realised the bulls running after them were not stopping.

One man, who just happened to be running away from a bull at the time, got his left buttock caught on a bull’s horn, just inches from his brain, but was luckily dragged several hundred yards along the ground to safety by the animal.

The San Fermin running of the bulls festival became world famous with the publication of Ernest Hemingway’s 1926 novel ‘Idiots who run from bulls on a street in Spain somewhere’.

“Running from bulls was probably not one of the best ideas I’ve ever had.” said Timothy Savage, who was paralysed from the eyes down yesterday after being crushed by a bull that was running at the time.