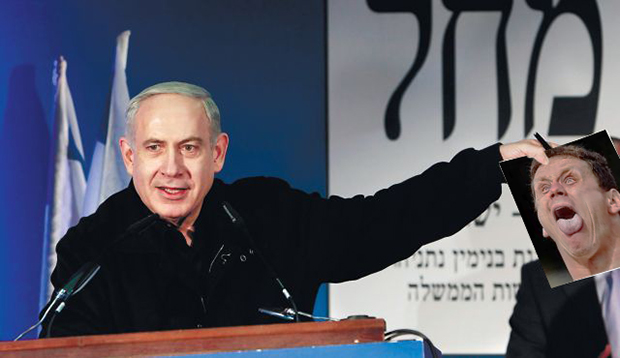 ISRAELI Prime Minister Benjamin Netanyahu defended airstrike’s on Palestine today, claiming its neighbour keeps staring at them and making funny faces when the rest of the world is not looking.

At least 25 Palestinians have already been killed and 70 hurt in the latest hostilities, forcing the Palestinian Sunni Islamist organization to retaliate with a barrage of rocket attacks on Israel.

“They started it,” said chief of their Political Bureau Khaled Mashal. “Those Israelis are always at it; dropping bombs from planes and shit. What do they expect us to do, bend over and take it? The greedy sons of bitches keep stealing our land and killing our children. Of course we’re going to fight back yo!”

Netanyahu responded to the accusations, stating: “The foreign media fails to see what they’re doing over there. Do you think we built that wall for the hell of it? No. They’re always staring at us. Any time we ask what they’re looking at, they scob at us and make a stupid face. It’s really annoying and they should stop it!”

Unconfirmed Israeli media reports claim that Hamas members have been looking at Israel for quite some time, and that the numerous face pulling instances (FPI) have been on the rise over the last month, with over 20 FPI’s a day.

“How would you like it if someone kept staring at you and making rude gestures.” asked the Israeli leader. “You wouldn’t, would you? You’d bomb the fuck out of them. That’s what you would do. Bomb them and kill them until they stop”.

American president Barack Obama, who strongly condemns rude gestures between nations, called for peace between the two sides and has told Mr. Netanyahu to take no notice of Iran as it was ‘only jealous’.

“Israel should just not take any notice of Hamas,” advised the American President. “They’re only mad for the bit of trouble them lads”.

Hamas spokesman Ahmad Adhim told WWN that his organisation was only staring in the Israeli’s direction because it keeps hearing loud noises all the time and that the sun was probably shining in their eyes every time they looked over.