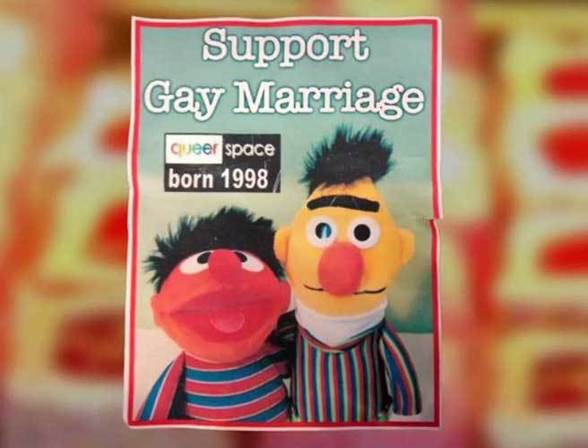 A DEBATE as to the sexual orientation of cakes has continued to divide people in Northern Ireland with no signs of a compromise or consensus being reached.

“When is a cake a gay cake?” Pondered Eamon Spillane, a rival of nearby Asher’s Baking Company, the bakery at the centre of the gay cake row.

“We’ve long since arrived at an answer as to the religious beliefs a cake may or may not hold, but this is a whole new can of worms,” added Spillance.

The cake at the centre of the controversy was requested by Queer Space, a volunteer group, and featured Sesame Street characters Bert and Ernie attempting to coax innocent children into the cake itself, which could turn them gay if contact was made with the icing.

“This is where it gets complicated, I was completely unaware cake’s were preditorial in nature, well gay ones at least,” added concerned citizen Ida Hilton, “I’ve sworn off cake until we can define what cake can mean for a man or a woman”.

Professor Bjorn Tallun, head of the Cakeology Research Centre in Sweden weighed in on the debate early this morning bringing an expert’s view on the matter to the concerned public.

“Pink icing is not an indicator of a gay cake despite what some say. The real question is, were there two men engaged in sexual activity throughout on the cake as it was baked and when the icing was applied. It is very simple. If this is not the case then it is a traditional cake which somehow reinforces the institution of marriage with each and every bite,” the Professor concluded.,