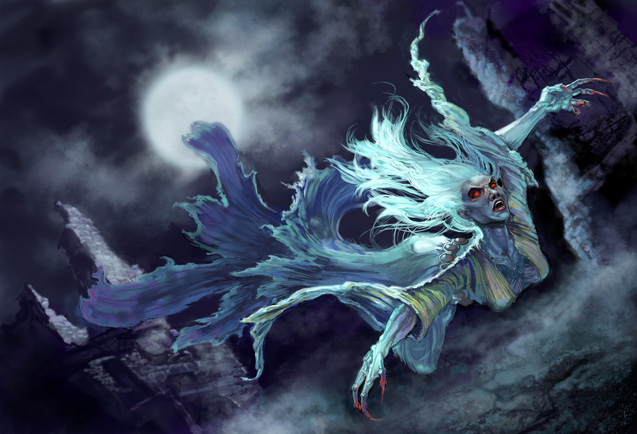 A NEW report from the Irish Mythological Association has revealed an alarming decline in Banshee sightings over the past decade.

The results of the study reveal that in the years 2004-2014, there were zero reports of the dreaded spirit; a 100% decrease from the previous time frame.

The Banshee, often depicted as either a beautiful young woman brushing her hair or a haggard aul bitch wailing her eyes out, is one of Ireland’s most commonly known mythical entities. A harbinger of death and misfortune, those who heard her cries (commonly those with the surname prefixes O’ or Mac) were said to soon meet a grisly demise. As such, the decline in Banshee appearances has been welcomed across the board, particularly members of the Banshee Safety Authority.

“We’re delighted with the reports, ” said Sean MacNeill, chairperson of the BSA.

“For many years, we’ve been trying to eradicate not only this malevolent spirit, but any malevolent Irish mythological creatures. Our friends in the Leprechaun Awareness Association have managed to fight the scourge of the little folk by caricaturing and commercialising their image to the degree that Irish people grew to ridicule and disregard the respect their elders had for the supernatural”.

“We were unable to do this for something as ghastly as the Banshee, although God knows we tried with Banshee Bones crisps. In the end, all we needed was for enough Irish heritage and mythology to be eroded by the hubris of smartphone generation, and the scourge of the wailing woman was gone”.

As families ranging from O’Brien to MacBride breathe a sigh of relief across the country, many believe that the lack of Banshee sightings may coincide with the mass emigration of Irish people over the past decade.

The huge drain on the country’s most precious natural resource could have led the keening spirit to fellow expats in Australia or Canada, and as such the Irish embassies in these countries have been put on high alert.