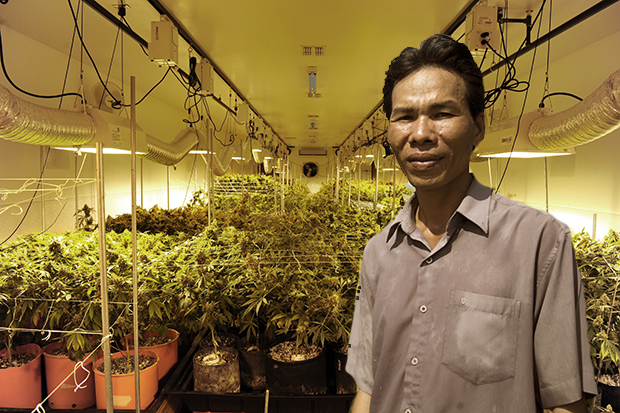 A NEWLY arrived Vietnamese immigrant said he is “delighted” today after securing a full-time horticulturist job just three hours after landing in the country.

Speaking through a translator, he said: “When handlers opened the shipping container I knew Ireland was going to be a great opportunity to show off my skills as a crop farmer. I can’t wait to get stuck in and do a great job for my employers.”

The 44-year-old farmer applied for the position in a Ho Chi Minh newspaper, in a bid to pay back some “family debts” owed to a Vietnamese businessman.

“They have my sister so it’s just great to be able to start earning some money so our family can get her back.” he said. “This new job will have me working twenty-four-seven, but at least I’ll get free board and twenty euros a week while I’m here.

“Sure, I’ll be so busy working I won’t get to time to spend it.” he joked.

Bui is expected to travel to a rendezvous point at 7pm, where he will be transported with several more ‘horticulturists’ to the Longford industrial estate in the back of a truck.

“No idea what we’re growing as it’s all very hush hush at the moment. Apparently it’s a big operation so it should be a great experience for me and the other lads that didn’t die in the container over here.”

“From what I’ve seen through the cracks so far, Ireland looks like a very beautiful country filled with opportunity.” he added, before being forced into a car trunk by his handler.