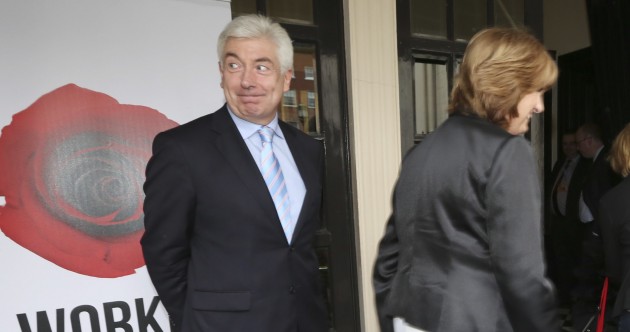 JOAN Burton’s first day as Labour Leader has led to scenes of much hilarity among her coalition partners, after the recently elected Tanaiste was duped into going to the shops for a ‘Long Stand’ and a ‘Big Weight’.

Eager to get working on a mandate, which includes arguing for a low pay commission to deal with the minimum wage and an ambitious programme for social and affordable housing, the new Tanaiste found herself at a loose end on her first day while waiting for IT to sort out her computer login details.

Not wanting to appear workshy, the Dublin West TD asked her fellow members of parliament if they needed anything from the shop, at which point several Junior Ministers and Seanad members sent her on a merry chase.

Burton, who succeeded Eamon Gilmore who resigned as labour party leader after realising the utter futility of his post, spent this morning visiting a succession of hardware shops in an attempt to procure the spoof items, which also include a ‘Skirting Ladder’ and ‘Red Sparks for an angle grinder’.

Smart-arsed shop assistants kept the jape going by suggesting other stores that might stock the items, while TDs kept in contact with the clueless Burton to see if she had purchased the “much-needed” items yet.

“Ah sure you have to have a bit of craic with them on their first day, ” said Simon Coveney, Minister for Agriculture, Marine and Food. “Although, I can’t believe how she has totally fallen for this. Usually people realise they’ve been had after the first shop, but I’ve been texting her all day and she hasn’t a clue. I asked her to pick me up some Sky Hooks while she’s at it, and she said no problem”.

The tricks played today are just one part of what will prove to be a tough week for Joan Burton, as she comes to terms with the fact that not only is she leader of one of the most powerless political parties in the free world, but also that she will be on emergency tax until HR sort out her payslips.