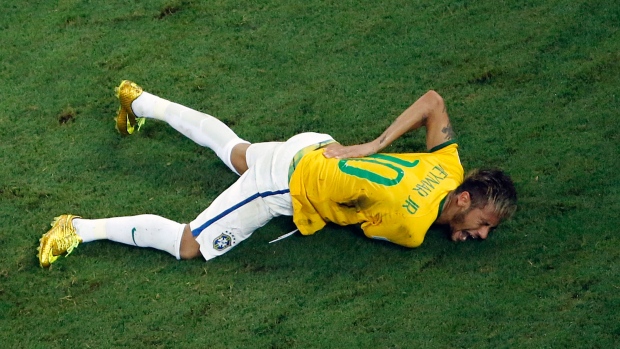 Brazil progressed to the semi-finals in a bruising encounter against many fan’s favourites the very entertaining Colombians. FIFA for the first time implemented their ‘free for all’ rule which saw players allowed to brutally knock seven shades of shite out of one another without fear of awful things like yellow and red cards being issued.

A casualty of this policy was poster boy of the World Cup Neymar, who suffered an injury to his vertebrate as Colombian player Zuniga recreated his favourite finishing move from popular video game Mortal Combat. Referee on the night, Carlos Velasco Carbello, will now return to UFC as FIFA have brought an end to their refereeing exchange programme.

A stunning David Luiz strike proved to be the difference between the sides and prompted 1 in every 3 commentators at the game to use a variety of expletives when the ball rippled the back of the net. ‘Shit!’, ‘Christ Almighty’, ‘good jaysus’, ‘fuckin’ hell’ and ‘Jesus, Mary and what a fucking strike’ were amongst the most popular descriptors.

FIFA have made special arrangements which sees female Colombian fans, regarded by many as the most attractive fans, stay on for the remainder of the tournament. A support fund set up by TV cameramen has ensured they have the extra financial means to stay on.

France and Germany faced off in the first of the quarter finals, which saw a Germany advance after a 1-0 victory. Many football fans chose to erase the game from their memories as it wasn’t terribly exciting.

Argentina and Belgium played out a similarly dull affair with Lionel Messi bringing shame upon his nation again as he spearheaded their victory. Messi has thus far taken an underperforming Argentinian team to the semi-finals of a World Cup scoring 4 goals in the process, but couch experts can confirm he is not Maradonna.

WWN cannot confirm reports that Sepp Blatter awarded the 2014 World Cup to Brazil in an effort to track down and reunite former Nazis believed to be in exile in South America. Blatter is believed to be spearheading an ingenious and villainous plan akin to the one drawn up in the popular Hollywood movie The Boys From Brazil, which starred Laurence Olivier and Gregory Peck.

Costa Rica, the tournament’s biggest underdogs took the Netherlands to penalties as a thrilling extra time finished 0-0. Louis Van Gaal, a manager 99.9% of Manchester United fans have pointed out is their new manager, took the strange decision to substitute his goalkeeper in favour of Tim Krul just for the penalties. This decision proved to be a masterstroke as Krul spent the time in-between the penalties pacing up and down the penalty box engaged in unsporting behaviour much to the amusement of the referee who did nothing to stop Krul’s antics.

Tuesday sees Brazil take on Germany, while Wednesday sees the clash between the Netherlands and Argentina. Foolish football fans are hoping for either Brazil and Argentina to emerge or Germany and the Netherlands, meaning the final could be played out by two of the fiercest rivalries in world football. Were either of these final line ups to emerge from the semi-finals the game itself would most resemble a drunken fight in Temple Bar at 3am.