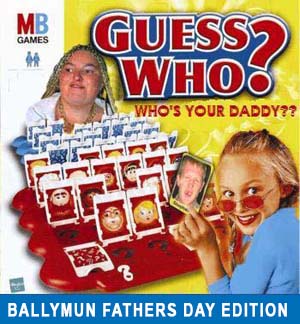 HASBRO have announced a special edition of the popular two-player guessing game, Guess who.

The game is said to be quite similar to the original. Each player starts the game with a board that includes images of 24 people possible fathers and their first names.

It starts with each player selecting a card of their choice from a separate pile of cards containing the same 24 images. The object of the game is to be the first to determine who is the daddy of the opposite player.

Players alternate asking various yes or no questions to eliminate candidates, such as “Does this person have a swallow tattoo on his neck” or “Has he any teeth left in his head”.

Well-crafted questions allow players to eliminate one or more possible cards. The person who guesses the correct father, wins the game.

However, guess who’s your daddy has sparked some controversy due to its taboo nature. But Hasbro have claimed that all 24 Ballymun males selected for the game have all agreed that their pictures are to be used in the games line up.

Each father was carefully picked by Hasbro after a brief meeting with the local health board early last March. The chosen 24 are said to be the top child donors in the estate.

The €9.99 game will go on sale this Saturday in all good toy stores around the country. Smyths have stated that there is already a long waiting list for the game and advise all customers to phone in advance to save any disappointment.