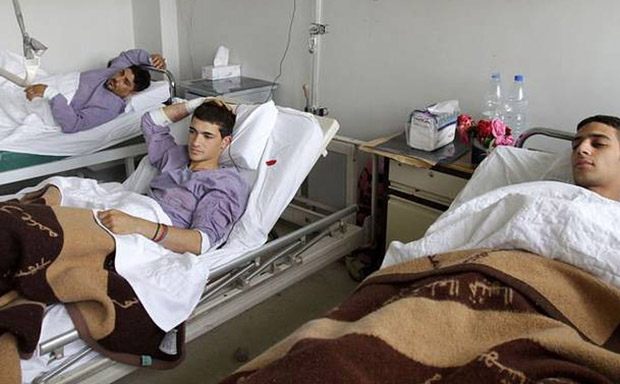 A&E wards across England were last night struggling to cope after Sky Sports inaugural GAA broadcast inspired swarms of young men to give hurling a try, resulting in devastating injuries to hundreds.

Enamoured with the strange sport following Twitter’s “Shock and Awe” reaction to Kilkenny’s 5-32 to 1-18 annihilation of Offaly in the Leinster Senior Hurling Championship, many young Englishmen sought out their nearest GAA club to attempt a replication of the high speed action they had just witnessed. A mix of poor hand-eye co-ordination, tactic free play and general Englishness is believed to have led to the majority of the injuries suffered, which range from broken fingers to total body paralysis.

Describing scenes which were common up and down the country last night, ex-pat Sean Beag McGuinness spoke to WWN about how 12 young Englishmen had to be ambulanced away from his local GAA club, St. Finbars in Manchester.

“Me and the team were having a lash around last night around nine, just a bit of craic” said 25-year-old McGuinness, a plumber who originally hails from Donegal.

“A group of the locals were passing by and asked if they could have a go. They’d just seen the hurling on Sky Sports and thought it was great, so we gave them our sticks and let them at it. Within ten minutes, we had to call an ambulance. There was teeth everywhere, lads hobbling around crocked… the lad that was in goals had a head on him like a punnet of strawberries that’d been dropped out the window if a moving car”.

“It’s not that they were overly rough or violent, they were just… English. You hand an Englishman a stick and a ball and tell him to run with it, and this kind of thing is bound to happen”.

Speaking on behalf of the GAA at an emergency press conference called to stem the amount of GAA related injuries being suffered by the English, Hurling Physio Eoin “Mac” O’Brien appealed to new fans to not attempt to recreate the scenes they witness at GAA matches.

“GAA players are trained athletes” said O’Brien. “For your safety and the safety of those around you, we appeal to new fans to never try this at home. We appreciate that a lot of people are going to watch GAA for the first time on Sky Sports, and we know how thrilling it can be. You may find yourself wanting to go out an replicate the action at your nearest GAA pitch, but please always remember; you’re English. Stick to the cricket and the lawn bowls”.