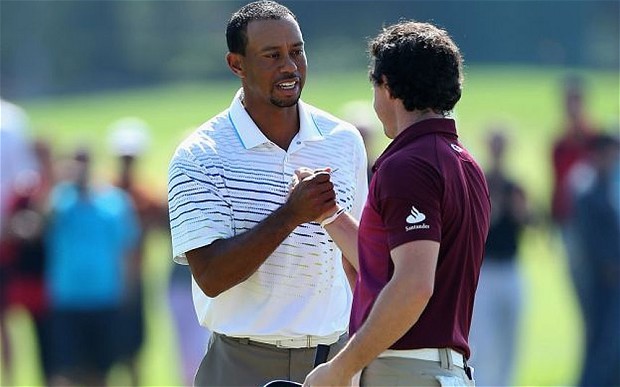 GOLFING legend Tiger Woods has moved to comfort Irish ace Rory McIlroy following news that the County Down man had called off his engagement to tennis star Caroline Wozniacki.

Woods made a visit to McIlroys Florida home this morning, where he found the crestfallen youngster had spent the night listening to Coldplay and eating Terrys Chocolate Oranges.

“Rory was in a bit of a state when I called round” said Woods, star of Tiger Woods PGA Tour 1999-2014. “So I told him to have a shower while I made him an Ulster fry up with potato farls and fried mushrooms. After he had washed and eaten, he felt a bit better, so I assured him that no woman was worth crying over and signed him up to Tinder”.

2012 PGA Player of the Year McIlroy, who had proposed to Ms. Wozinski on New Years day following a two year relationship, called off their wedding following a bout of cold feet and has refused to comment on the matter beyond an official statement in which he wished the Danish tennis star all the best in life. It is believed Woods will stay with McIlroy until the 25 year old is feeling better.

“I told Rory that there are far worse ways for a relationship to end” said Woods, possibly referring to the breakup of his own marriage in 2009 following a turbulent battle against a crippling sex addiction.

“Caroline Wozniecki was a huge part of his life, but Caroline Wosniakie is now gone; it’s time for Rory to start thinking about Rory. We’re going to hit the clubs pretty hard today; I reckon a nice day on the fairway playing golf will clear Rorys mind. Then after that I’m going to take him to town and get him hooked up with some really nasty freaks”.