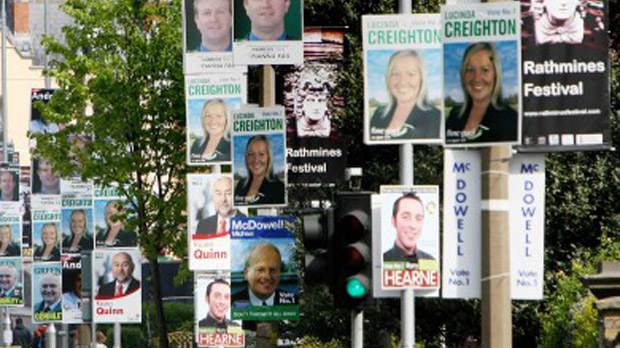 A STAGGERING one hundred and sixty three people across the country have already been killed and another 376 injured in election poster related accidents, it has been revealed today.

Pedestrians as young as 3 years of age have been admitted to hospital with severe injuries from falling cardboard pictures of politicians.

The number of dead is expected to double by election day, the 23rd of May.

Many of the victims have had posters surgically removed from their skulls, forcing local county councils to ensure proper procedures are in place over the coming weeks.

Yesterday evening a 86-year-old man from Cork was struck by two falling Sinn Fein posters while on his way to mass. Both posters were found lodged into the man’s torso, killing him instantly on the scene. Investigators believe the pictures were not secured properly and blew off during a freak gust of wind.

“It’s just a pointless waste of life.” told Detective Sargent Superintendent Garda Derek Rice. “Last week a man from Clonakilty was decapitated by another Sinn Fein election poster while crossing the street. Luckily a bystander thought quickly and ran into a local shop and bought ice for his severed head. He is very lucky to be alive.”

In 2011, only 203 people were killed during Government elections. However, this year sees two big election campaigns across the country: the local and European elections.

“I don’t think it’s wise to have the two elections running together simultaneously.” explained safety expert Gabriel Tracey. “There are twice as many posters on poles. No wonder people are being killed right, left and centre.”

Since the time of writing, four people were killed in Cavan when an election poster flew off its pole and landed on the windscreen of the minibus they were passengers in. Ironically the victims were said to be part of a canvassing party for the same politician on the poster.

More on that as we get it…