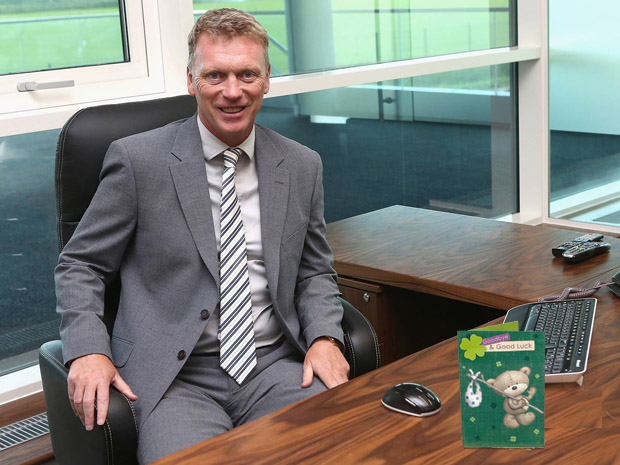 MEMBERS of Manchester United’s first team squad have organised a whip-around for David Moyes following this mornings official confirmation that he had been sacked as team manager after a disastrous season.

The rumours over the weekend that the fright-headed Scotsmans position at the club was to come to an end following a 2-0 loss to Everton were verified this morning by a Tweet from the clubs official Twitter account.

Team stalwart Ryan Giggs has stepped in as interim manager for the remainder of the season, and his first managerial duty was to send Cleverley down to the shops to get a going away card and a sponge cake.

“We would like to thank David Moyes and wish him well for the future” said the Welshman. “In recognition for his services to Manchester United, me and the lads have chipped in a few quid for him. I went round the first team this morning and got a fiver each off them, well, most of them. Rooney said he didn’t have his wallet with him and Ferdinand is nowhere to be seen”.

The collection is estimated to be worth almost £175 to Moyes, minus the cost of the card and the cake. It is believed the presentation will take place when he arrives at Old Trafford later today to clear out his desk and hand in his official Managers jacket and front door keys. Moyes is also expected to leave £20 of the collection with Giggs, in order to remain in the clubs Lottery syndicate for the next few weeks.

The players have all taken the time to sign the farewell card, although an inside source has claimed that most of their going-away messages begin with the phrase “I’m not going to lie to you Dave”.