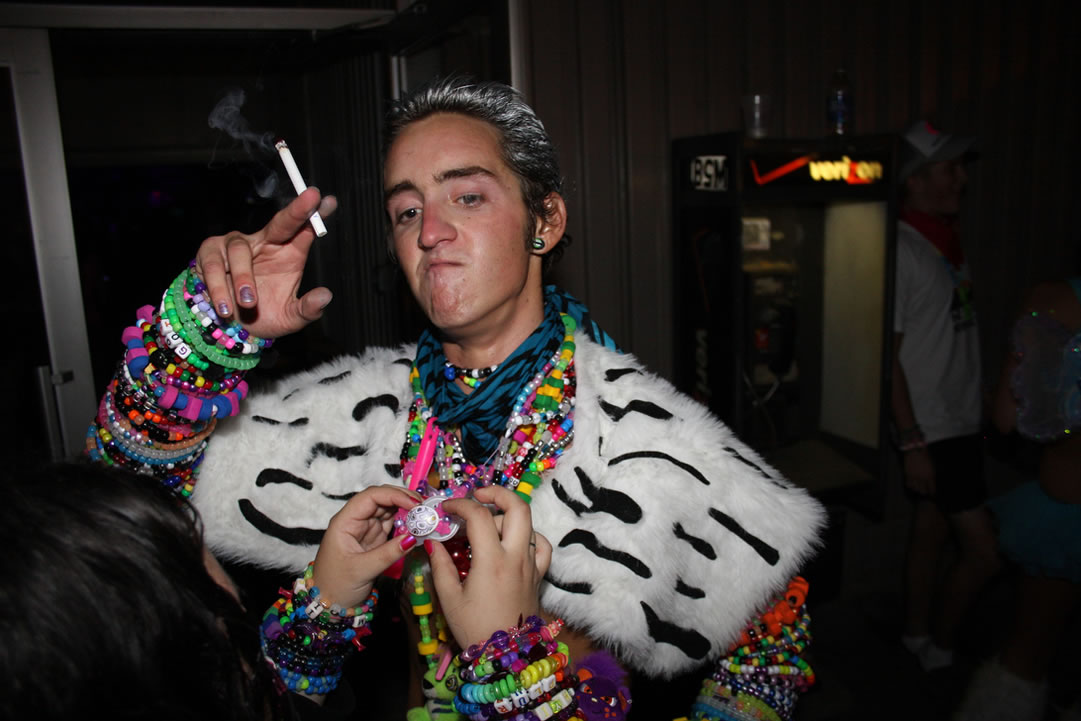 Patrick O’Brien has the same nightmare every night. He is in a cage with an oiled female – her bikini and thong are fluorescent yellow. A boa constrictor snake is wrapped around her neck. Her name is Lulu – and she’s a former waitress from Shoreditch, London.

Lulu writhes against Patrick’s naked, sweating torso whilst Josh Wink’s Higher State of Consciousness blasts his eardrums with thumping beats. On the dance floor below, thousands of drug addled youth pump the air with their fists and gurn like Popeye.

The year is 1999 – the location: Manumission, Ibiza. A 22-year old Patrick O’Brien has just graduated from stage dancer to cage dancer. He will dance for 18 hours non-stop – 7 days a week – 365 days a year – hyped up on free vodka jelly shots and barrel-loads of Ecstasy tablets.

This will be his life for the next decade. It is a hellish existence – full of sound and fury and casual sex – a life now documented in O’Brien’s harrowing autobiography, ‘12 Years A Rave.’

Mr O’Brien spoke exclusively to WWN about his journey from occasional disco dancer to 24/7 party person.

“Like most people growing up in the 90s, I was drawn to dance music like a moth to a flame. In the early days, I’d linger near the edge of the disco floor, nodding my head up and down, perhaps with the occasional foot tap. But then the DJ would pump it up a little – moving from Snap’s Rhythm Is A Dancer to something more hardcore like Orbital or 808 State’s Flow Coma.’

Not at all like that baking soda shite the kids eat today.’

Patrick O’Brien is a wonderful dancer. Especially when ‘off his beak’ on Ecstasy. His arms and legs move effortlessly to the rhythm – a blur of precision choreography – accompanied by an elegant closed-eye ‘side to side’ head sway that lets you know he’s in charge of the beat.

‘I was definitely the best dancer in the mid-90s Waterford club scene. I’d tear it up at Preachers and blow the roof off Flow Motion. Both clubs are long forgotten now – but I like to think my silky moves are not.’

His talents did not go unnoticed. Throughout the 1990s, Manumission scouts were sent all over Europe in search of dancers. Certain high-end requirements were needed to make the Manumission A grade.

‘Well, you see, the perfect Manumisson recruit needed to look awesome in Speedos and glow sticks. That was a prerequisite. Body paint was also a major factor – as well as whistles and novelty sunglasses. You had to look great dressed like a twat – and not many could pull that off. But I could.’

And so, while cranking out dynamic box shapes in Waterford’s Roxy Club in 1997 – Patrick O’Brien was offered a one way ticket to dance heaven.

‘This baldy Russian bloke rocked over to me when the lights went up and asked if I’d like to move to Ibiza and dance for cash. Naturally, I said ‘fucking too well, I do boy!’, and a few hours later I was on a Ryanair flight to paradise.’

Patrick O’Brien escaped Ibiza in 2010 and returned to Waterford to work in Argos. His tan and sculpted abs soon caused friction with his co-workers – as did his need to ‘make shapes’ every time a dance tune played on the in-store radio.

He soon quit and is now working as a sunlamp technician in one of Waterford’s more popular tanning salons. He does still go for the ‘occasional dance’ – but keeps his hands firmly at his side.

O’Brien’s autobiography is a cautionary tale. So next time you become a ‘slave to the beat’, please think of Patrick O’Brien – in a cage, with a sweaty chick – and a snake.