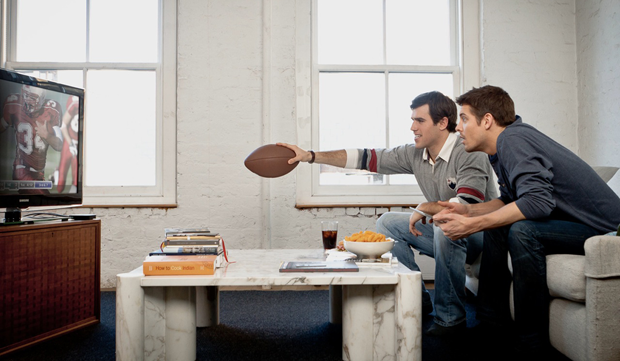 WWN can exclusively reveal the annual rush of Irish men limply displaying a passing interest in American football is in full swing in the run up to this year’s Super Bowl.

The NFL’s final game of the season sees the Seattle Seahawks face off against the Denver Broncos, but you already knew that what with being a veteran of the football scene.

The decision by some Irish men to force themselves to watch and ‘enjoy’ American football can often lead to damaging rifts with friends who have zero tolerance for that kind of bullshit.

Many Irish men who struggle to acknowledge the NFL’s existence are often on the receiving end of harassment from their 4th-quarter loving friends.

“What would I be staying up til 4 in the morning for? I’ve work on Monday,” offered another NFL-denying Irishman Cian O’Dea.

WWN understands that many non-NFL fans succumb to the pressure from their friends and watch the game while getting caught up in the unique atmosphere of a Super Bowl Sunday.

“Yeah, I gave it a shot last year,” explained Dave Mullens. WWN pressed Mr. Mullen further on his introduction to the sport: “Nah, it was shite”, Mr. Mullens concluded.

Many sport lovers who can enjoy all manner of sports still struggle to connect with American football. Despite its growing popularity, many Irish men still refuse to get invested.

“My mate Séan rang me the other day to see if I thought ‘the Broncos defence could hold out’ but he pronounced it ‘dee-fence’…he actually said that. I don’t know who this guy is anymore,” shared an agitated Colm Kelly, “this is the same Séan now – from Navan who says ‘I thrun’ instead of ‘I threw’, I just don’t understand”.