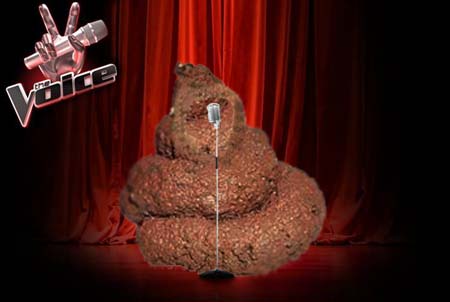 A large pile of steaming shit is being tipped to be the winning act on RTE’s ‘singing’ competition The Voice of Ireland.

The one-piece pile of excrement has been given the best odds by bookmakers Paddy Power to snatch the two fingered crown at the finals in April.

The Voice judges were ‘blown away’ by the pile of shits performance last night and fought at length over who would coach the rising star through the shows third series.

After some deliberation with itself, the shit decided to choose singer, songwriter Kian Egan as his mentor.

Egan said he was ‘delighted’ to be picked over fellow judges Jamelia, Bressie and your one from the Cranberries.

“I’m actually shocked shit picked me over the rest of the guys. I thought he was going to go for fellow shit Bressie, but he didn’t!” he said. “I just can’t wait for him to ‘squeeze out a few belters’ over the next few weeks”

“The minute I heard him spout those lyrics I spun the chair.

“I don’t think there was a dry eye left in the audience.” said the world famous super rock star from the ska-punk/pop band The Blizzards, who got to number 2 in the Irish single charts once.

Paddy power has placed odds of 13/9 on the large steaming pile of shit to win the competition in April.