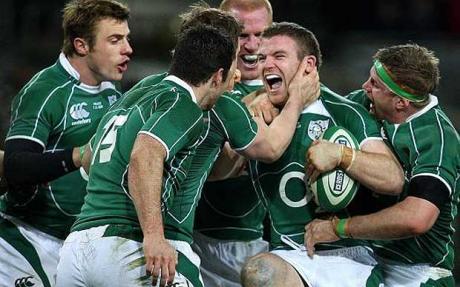 The Irish public’s long wait to see Joe Schmidt’s reign as Ireland manager kick off will have their wish as of 5.45 pm today.

The anticipation for Irish rugby’s new era has seen a number of Irish men display increasingly odd expressions of patriotism and pride. The IRFU’s official Facebook page has been besieged with messages of good will but there has also been a small section of inexplicably homoerotic entries from seemingly heterosexual men.

WWN caught up with a number of Irish rugby fans in Dublin’s City centre ahead of today’s game. “If you start a sentence with ‘I’m not gay, but’ you’re setting yourself up for trouble so I won’t but, yes I would sleep with BOD. There, I said it” shared Oisinn O’Dwyer, a 35-year-old married father of three.

“You know that question ‘if there was a fire in your house’? Well, I’d fucking carry Paul O’Connell out over my shoulder before the missus,” added 27-year-old straight man Noel Vaughan.

“I always say don’t cry during the anthem, but if I catch sight of Rory Best on the big screen that’s me blubbering like a baby,” admitted ladies man Greg Nevin.

Rugby experts predict that Irish men, who would under different circumstances punch another man for complimenting their appearance, will rush to fawn over the Irish squad’s physical prowess during today’s match.

Phrases such as “just look at the size of his legs” and “he’d do you some awful damage in the bedroom” will accompany more familiar rugby parlance.