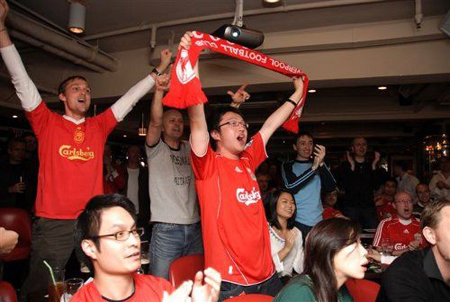 His wife Ciara was once again left dumbfounded when her usually intelligent, bright and self-deprecating husband chose to dress up as a footballer on Saturday afternoon.

Daniel, a self-confessed ‘life long Liverpool fan’ has apparently been dressing up as a footballer every weekend all his adult life and up until a few years ago would also be found in full Liverpool kit on Tuesdays or Wednesdays.

“I questioned for a while was he developing some sort of psychosis,” admitted Ciara to WWN, “but outside of this strange routine he manages to hold down his job and is an engaged and loving person.”

Ciara went on to explain that she often found Daniel would be withdrawn while wearing the red jersey, lacking any investment in conversation instead choosing to shout at the TV as if he somehow was able to effect change in the sport unfolding before his eyes.

“It got to the point where if I saw him wearing the jersey and shorts I would cancel any visitors to the house, I just didn’t want them, judging Daniel, like he is so grounded and normal the rest of the week,”

Ciara said before beginning to weep, “what am I supposed to do? Go to the doctor and tell him my husband dresses up as a 34-year-old man he has never met but inexplicably worships? I’m at a loss as to what to do!”